We had seen below-the-knees renderings before, but Monday, April 7th, we finally got a look at the rest of the body.  At a public meeting sponsored by 42nd Ward Brendan Reilly, long-time River North developer Albert Friedman presented plans for a 45 floor, 600 room hotel on Superior just west of Rush.  The new building seeks to demolish not only a seven-story building in the center of the block, but slice in half the east-west Superior street frontage of 740 North Rush, the brick-columned structure that was the long-time headquarters of Crain Communications and continues to be home to the popular flagship of Giordano's Pizza.  (which is scheduled to remain open even as the new building is constructed.)

As he usually does, Reilly promised to publish the renderings and presentation on his website, but since they're still not up, for the moment you'll have to settle for the lower-quality photographs we made of the presentation boards. 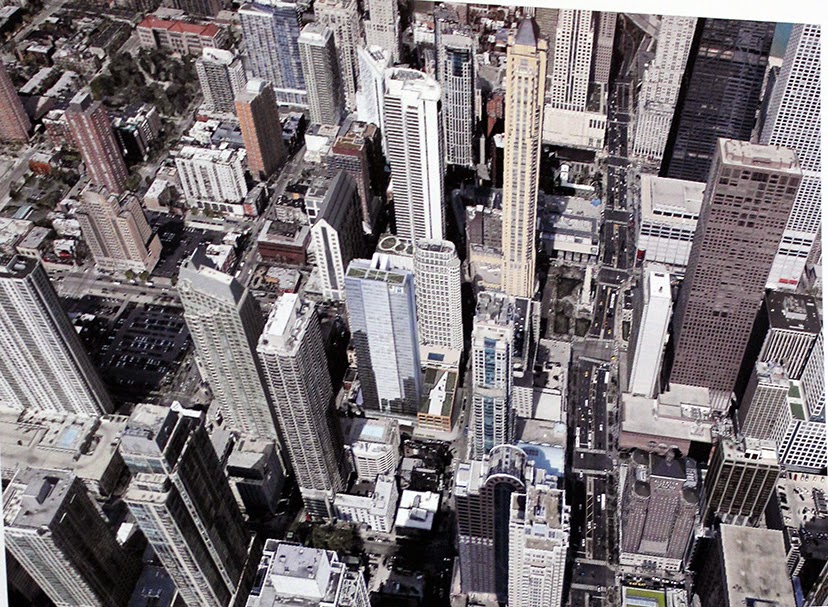 Although the Chicago Zoning Map shows the site with the designation DX-12, Reilly repeatedly referred to it was a Planned Development, as are most of the recently developed tracts in the area.

Friedman talked about the team of architects and designers he's assembled, all of whom have worked for him on previous projects, beginning with the Aria Group “who really  understands the retail and restaurant side of the equation, and this transition for Giordano's”,  NORR Architects Planners, “who really gets the nuts-and-bolts and the basic design of a hotel [and] . . . our aesthetic architect . . . Todd Halamka. Collaboratively, they're coming to us and saying, ‘What's the best we can do?’  Keep challenging yourself - within reason, of course, cost-wise - but to make something special.”  (Wolff Landscape Architecture is the landscape architect.  Friedman pledges that all of the new building's roofs will be green. )
None of the architects were called on to talk about their work at 740.  It was Friedman's show, as he both explained and defended his project.

Like his development at Clark, Illinois and Grand, which opened last year with three different hotel brands sharing a single site, Friedman's hotel at 740 North Rush will combine two moderately-priced Hyatt brands in a single building.   An all-suite Hyatt Place will take up the lower floors, with an extended stay Hyatt House on the upper levels. 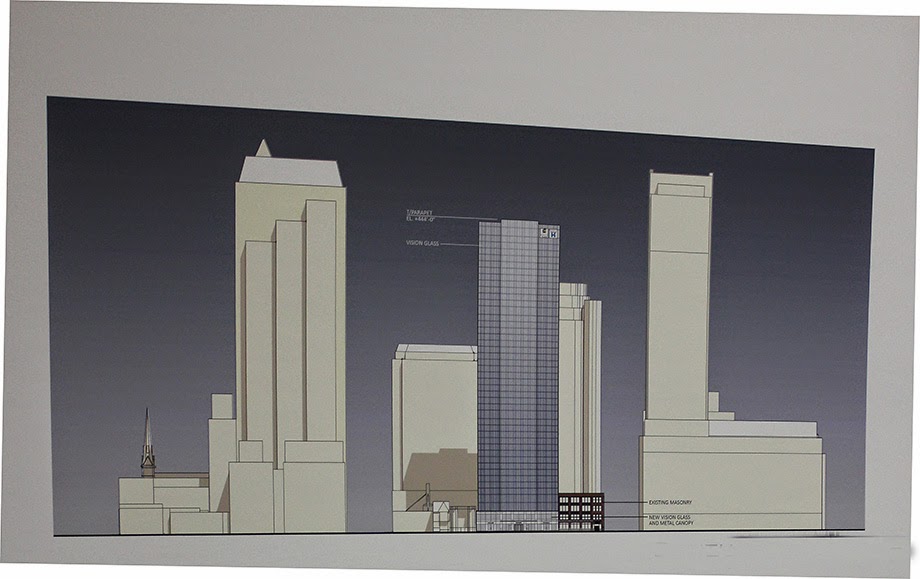 Addressing comments about there already being too many hotels in the city, Friedman explained his concept for 740 North:  “I'd like you to consider if there's another hotel north of the river currently that would be extended stay and have suite product at an affordable price that would be new just off Michigan Avenue that you would want to stay at, and there isn't any.  Any of these developments that you're hearing about are south of the river, or they're very boutique and chi-chi.  That's not what we're doing.” 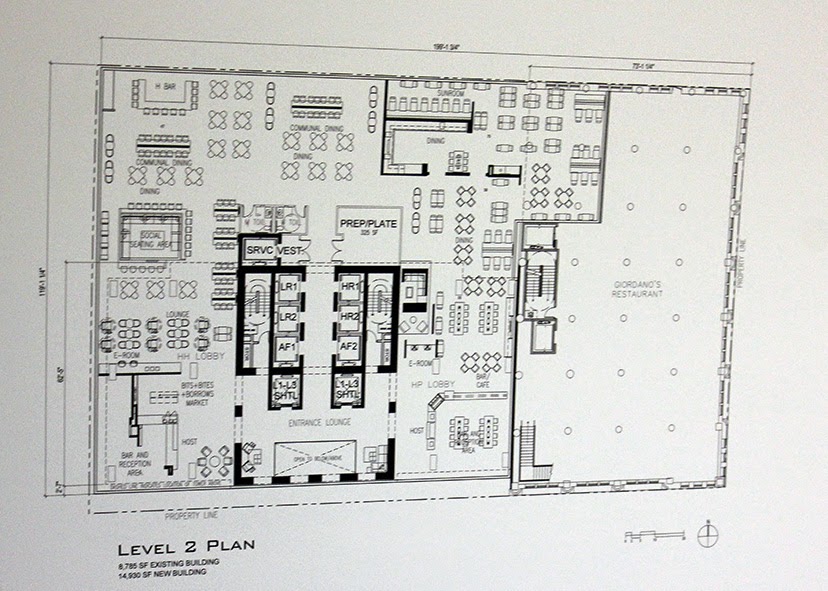 Two things 740 won't have?  Banquet rooms and parking.  This “sleep and get out” concept probably helps hold down costs, but Friedman is also claiming it will keep traffic problems in check.  Reilly came into office thinking his ward was seriously short of parking spaces, but he's since has come round to a diffrent view.  “If you build lots of parking storage, they will come.  It's like Field of Dreams.”

Peter Lemmon of parking consultant TADI told the meeting that in an area like this, about 30% of the hotel guests come by car, and 80% of those via taxi, translating to a maximum of 40 to 50 cars a day for the new Hyatt tower.  Standard Parking's Jim Buczek added that overnight hotel parking averaging $50-70 a night would probably be considered a bit steep to guests taking advantage of the Friedman project's more moderate room rates.  Although residents in attendance expressed their skepticism, Buczek claimed that Standard Parking's nearby properties could accommodate up to 300 additional cars in nearby garages at such buildings as the Fordham and 900 North Michigan, with an additional 4,000 spaces available in garages serving Northwestern's Streeterville campus.
Beginning in 1970 by inheriting a flophouse at Clark and Hubbard,  Friedman built his career out of rehabbing historic buildings.  In 1976, at 500 North Dearborn, when the area around it was largely skid row, Friedman provided the space in which Gordon Sinclair created his pioneering namesake restaurant. As Friedman told Michigan Avenue's Dawn Reiss, it was an epiphany moment. “I had people pulling up who had never been here in the past.  All I had before were drug dealers, pimps, and prostitutes.  All of a sudden I was actually seeing people who had money in their pockets.”  Friedman recalled that when he lured a second restaurant to space in on of his properties, it set Sinclair into a panic. “Why would you do that?  You're going to kill me!"  Instead, Sinclair found that more attractions brought more people to River North, and his business actually improved.  “I have 52 restaurants today,” Friedman concluded, underlining the moral we're to draw from his tale.

As Friedman became more successful, he acquired the 1892 seven-story Romanesque rockpile on west Hubbard (architect Otto Matz) - originally been the Cook County Criminal Courthouse - and renovated it into premiere office space as Courthouse Place.  A similar rehab of Alfred Alschuler's 1912 John R. Thompson building on Clark soon followed.  Over time, Friedman took on one old building after another, until his nameplates have become so ubiquitous that he's come to be known as the “King of River North.”
Although Friedman now seems to be moving from rehabber of old buildings to builder of ambitious new constructions, he still sees himself as a different kind of developer.

“Anything that I've ever done over the last forty-five years,” he said at the public meeting on 740, “has been a reflection on myself. I'm not a fee developer.  I'm someone who builds things, develops things, owns things, and keeps them . . . I take pride in everything I do.  And I do want everyone to be as satisfied as I am.”  Friedman once served a stint on the Commission on Chicago Landmarks, “so I'm very sensitive to landmarks and architectural integrity.    When you see the presentation you'll see why I wanted to preserve as much of the character of the buildings that are here.  I know that there has been some misunderstanding thinking that I  somehow I would take the brownstones down to the west and that's not the case.” 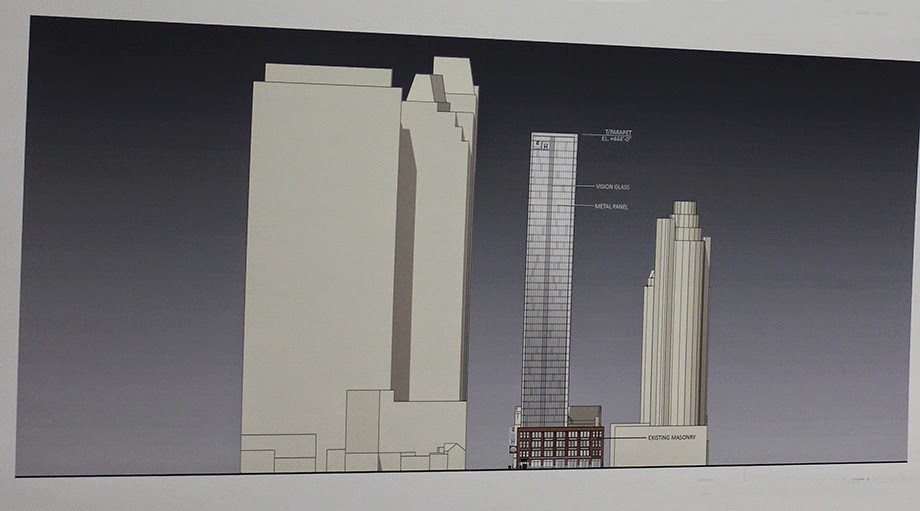 Friedman is proposing a tall, slender tower, 65 feet by 123. Unlike the proposed Hilton Garden Inn on east Wacker, which will have a 25-story-tall shear wall rising without a single window, the 740 North Rush tower will be encased entirely in windows, a “nice glass, clean-lined product”.  The building is also carefully set back on all four sides from its neighbors, providing a moat of air space that will afford every guest a view of something other than an air shaft.  The tightest fit is along Superior, and even there the building is to be set back an additional five feet from the lot line.   To the west are the two low brownstones, to the north, a 54-foot setback from the lot line, plus a 20-foot wide alley.  To the east, a 72-foot setback from Rush street.  According to Friedman, the design of the curtain wall is still being finalized.  While only the south and west elevations were revealed in the renderings shown at the meeting, the north and east are supposed to mirror them in design.

When the hotel project was first announced, many assumed that the old building at 740 North Rush was a goner.  That's proven not to be the case, but the structure is to be both truncated and reconfigured. 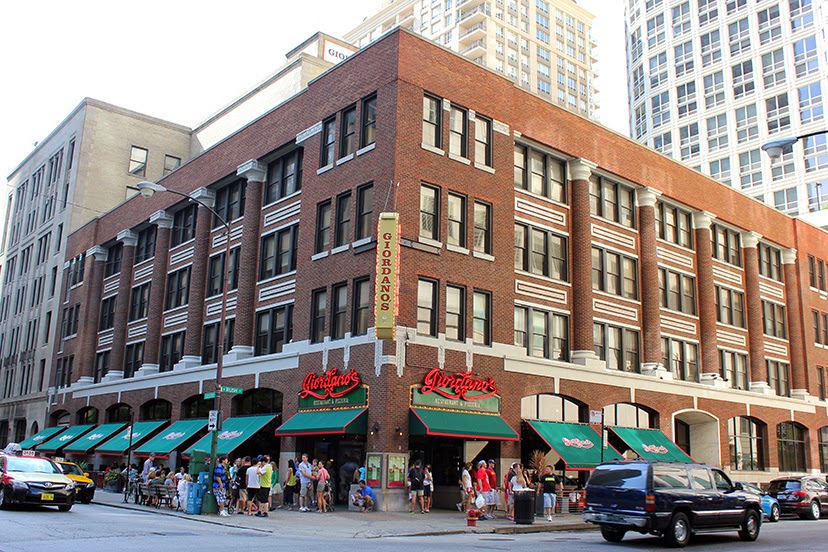 Designed by the firm of Thielbar and Fugard, 740 North Rush was originally built in the 1920's as the Chicago home of the Methodist Book Concern.  Its two street facades, along Rush and Superior, are essentially identical, a tall first floor topped by three-story colonnades, each with four tall rounded columns, book-ended by half-columns abutting thick anchor piers with three inset windows at each floor.  The tall spandrels carry simple, king-sized geometric terra cotta ornament.  The heavy, flat cornice, flush with the corner piers and top of the column capitals, puts a firm lid on the building. 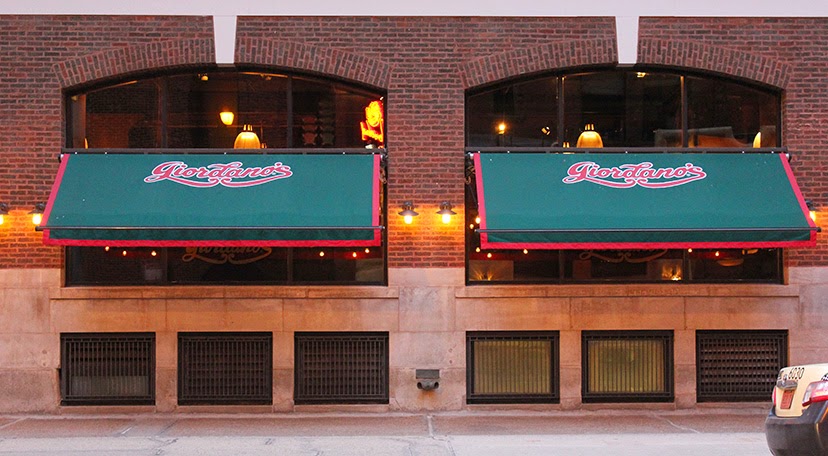 The first major change Friedman is planning is to get rid of the English basement windows looking down into the commercially unviable lower level.  Instead, the building will be configured to create a Superior street entrance to Giordano's, whose dining room will be moved to the building's second floor.  A second restaurant space is being configured at the north end of the building along Rush. 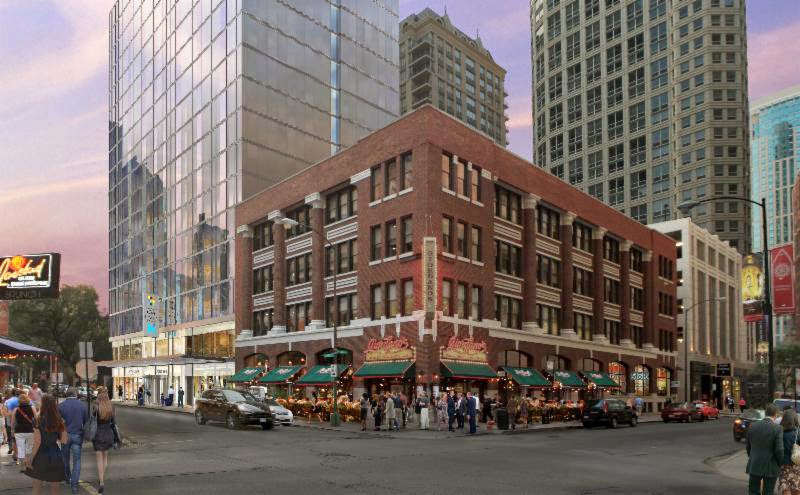 The second, more radical change is that Friedman is dramatically truncating the current building along Superior.  Although the building itself is anything but square, with a courtyard and cut-ins, along the street, 740 North Rush now reads as a symmetrical cube, with identical facades along Rush and Superior.   Friedman will demolish as much of the building as possible without having to relocate its elevators and stairwell., cutting the Superior street elevation in half.  To the west, it will no longer end with a balancing three-window anchor pier, but a sheared corner that appears different in two different renderings.  In one (the rendering above) it appears as a full rounded column next to a slender brick pier.  In the second, it looks like that the rounded brick column itself becomes the building's new corner. 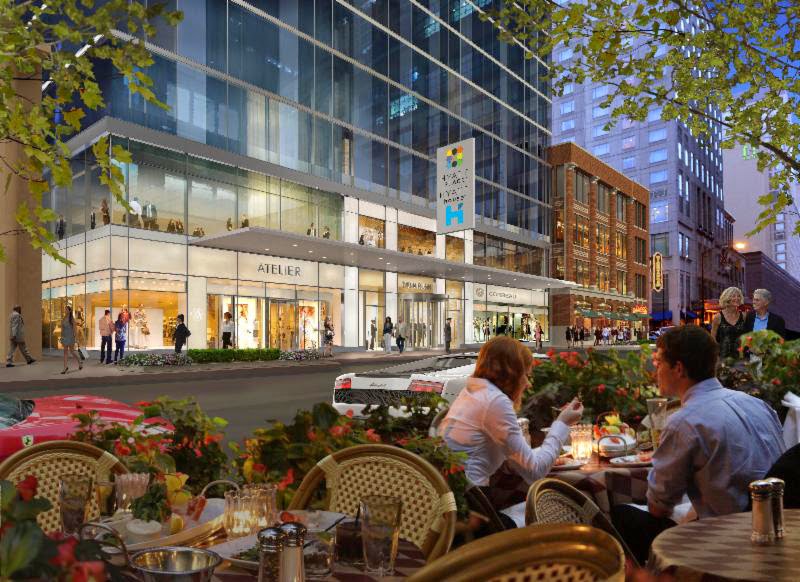 Putting aside the practical requirements, the demolition is an ungainly hack of Thielbar and Fugard's careful design, destroying its original symmetry.  While the Rush Street facade remains untouched, that along Superior now takes on the feel of a side street afterthought.  If Friedman's architects had recreated the full three-window pier as the new corner, there'd scarcely be room for two columns, so now, at the west end, the design doesn't so much conclude as simply run out.  (If it has to be done, I'm pulling with the rounded column as the corner.) 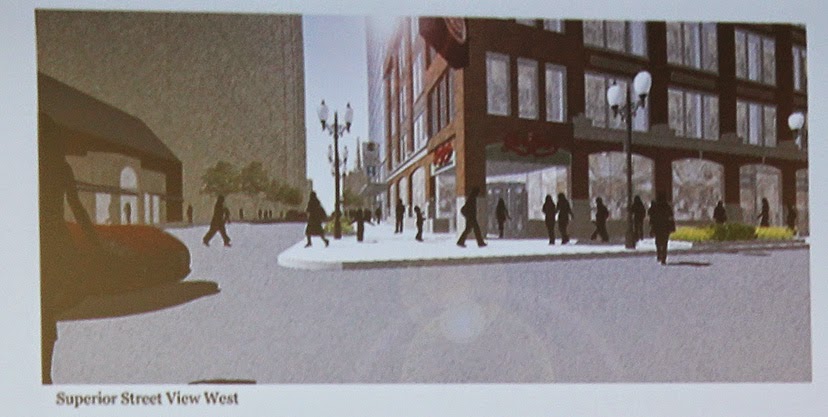 One comment to this blog suggested Friedman simply make a facadectomy of the demolished part of the building and extend it over the base of the new tower, maintaining the original design, although this would muddy up the clean lines of the new tower, and create its own problem of how the floors  of the new structure would line up behind the windows of the old facade. 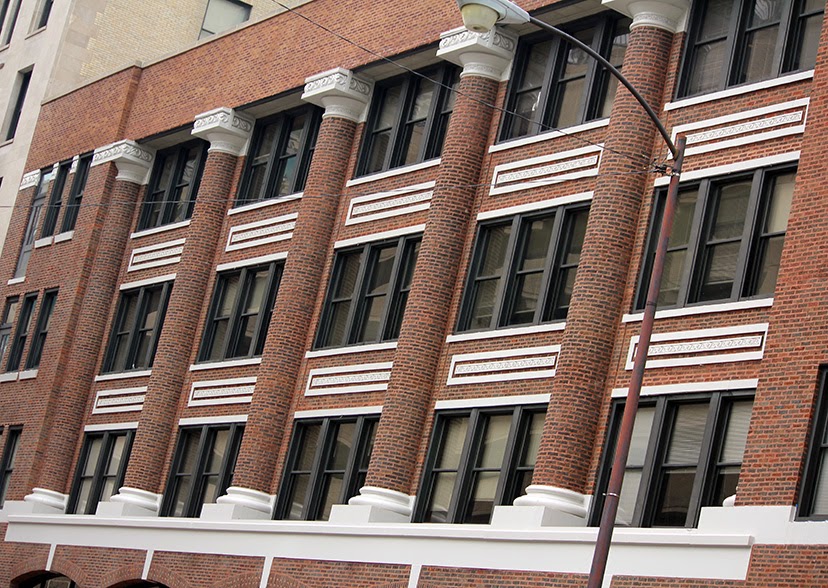 The bottom line is that 740 North Rush is Friedman's building to do whatever he wants with.  It has no official landmark protection.  He could probably just demolish it outright, and create a new, modern bustle for his hotel tower.  Instead, he's saving as much of the old structure as doesn't get in the way of his sleek (and lucrative) new skyscraper.  While I'd much prefer to find a way - even through a dreaded facadectomy - to preserve the integrity of Thielbar and Fugard's original, distinctive and graceful design, the juxtaposition along Superior of the glitzy glass tower, next to a multilating retrofit of the nearly century-old workhorse commercial structure of brick and terra cotta,  provides its own kind of poetry, a representation of the clash of old and new in a living, still-hungry city.