No city in the world, not even New York, has found such general use for common brick as we have found here on Lake Michigan.  Chicago brick, in addition to being used in business blocks, factories, residences and other buildings is widely used in building sewers and other construction work.  The outside demand for Chicago brick has been beyond the ability of the local plants to supply with their present equipment.  Millions of brick are  shipped to every surrounding state, as many as thirteen states being served with Chicago brick.

Chicago is fortunate in possessing a supply of what is known as “surface” clay.  This clay is the result of the glacial drift and is entirely suitable for the manufacture of what is known as common building brick.  In fact, it is superior to many other clays for this purpose, because of the ease with which is is prepared and the rapidity with which it can be fired and burned.  It is of a quality that can be manufactured into brick by what is known as the stiff-mud process, the most rapid method for making brick, and Chicago is now consuming brick at the rate of over a billion brick annually.

As with so many other things that were once the city's pride, Chicago stopped making brick a long time ago.  And yet the demand remains for what has come to be known as Chicago brick.  Not the high-toned glazed or polished brick with which buildings prepare the face to meet the faces of the other buildings it meets along the street, but the homely, rock-solid, non-face brick for secondary elevations along the side or alley,  There's still a strong demand for that unpretentious work-a-day brick retaining an abject beauty all its own. 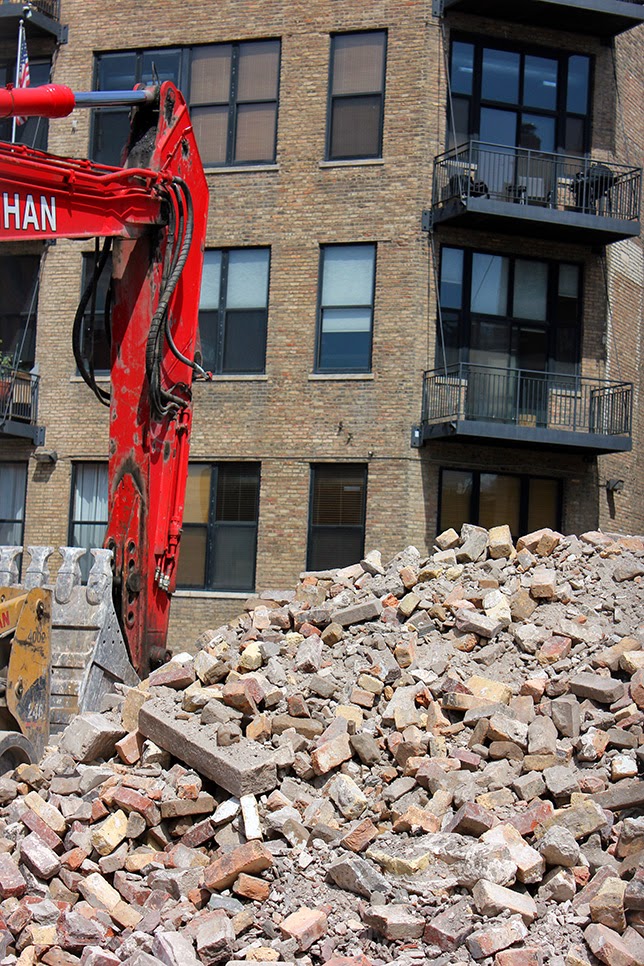 And so when we knock down buildings, as we're wont to do, the crews move in to sort through the rubble for the bricks not ruptured in the wrecking, to chip them clean to be neatly stacked and strapped and recycled. 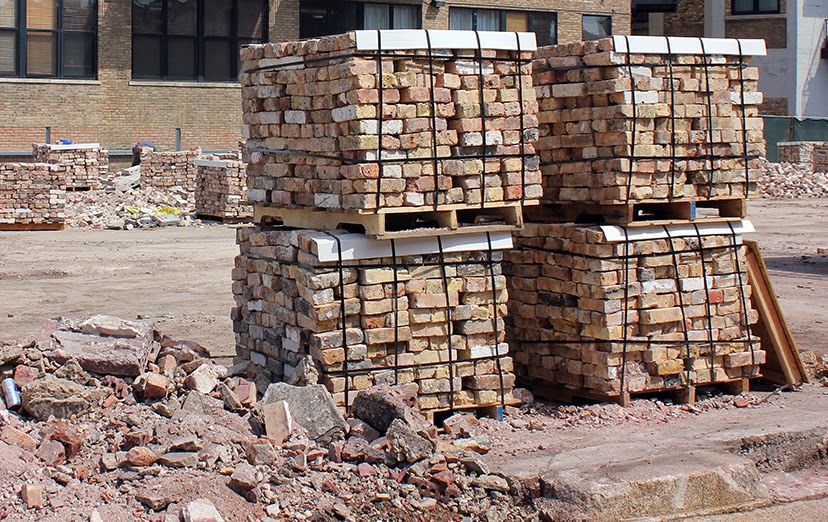 As we've written previously, the Sterling Bay Companies is slowly becoming Lord-of-the-Manor to Chicago's historic Fulton Market District, transforming it from its century-plus role as home to the city's meatpackers and food and dairy resellers to a high-tech district replete with health clubs, art galleries, fashion boutiques and trendy restaurants .  Sterling Bay's first assault was its most audacious - taking over the massive, windowless fortress of 1920's 12-story, nearly four million cubic foot Fulton Market Cold Storage building, melting decades' buildup of ice, stripping off the old facades down to the bare concrete bones, and converting the structure into office space where Google will consolidate its Chicago operations. 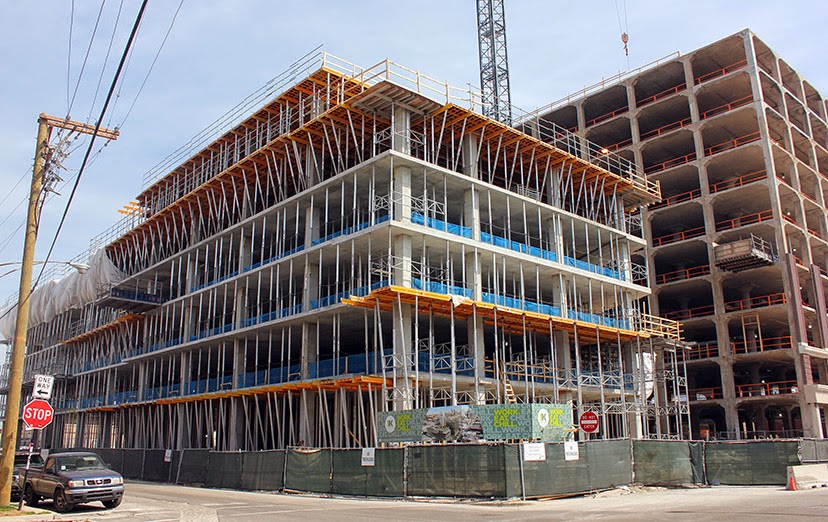 Last week, Fulton Market Cold Storage, now renamed 1K Fulton, was well on its way, with a new annex rising just to the west and retro-styled piers - of newly manufactured brick - being put in place on the spare concrete frame for the building's redesigned windowed facades. 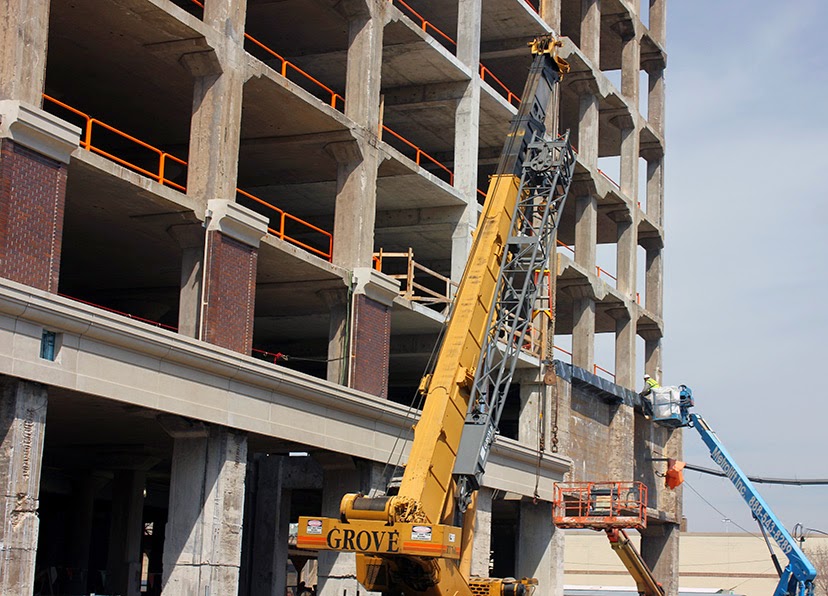 Now Sterling Bay is mopping up the scraps. Among other Fulton Market acquisitions, last fall they snapped up a series of properties along Lake Street west of Morgen, old one-story buildings of no particular aesthetic merit but that had served a succession of business well for nearly a century. 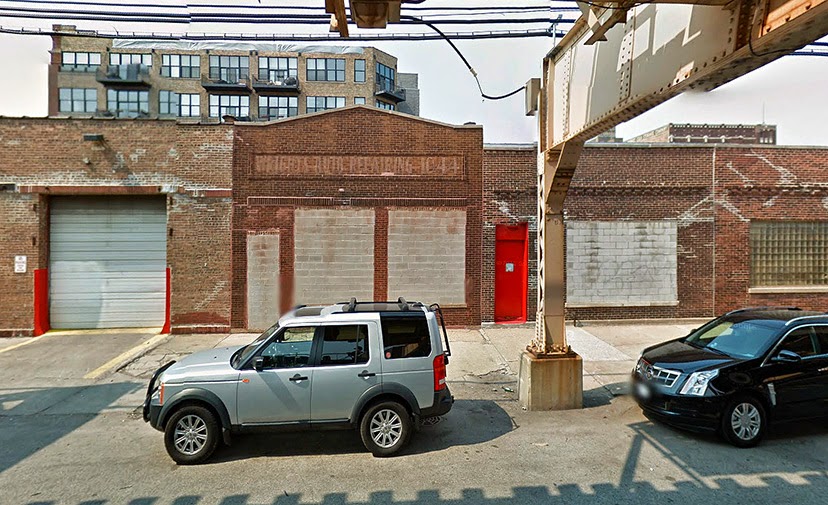 No more.   Those buildings are dust.  With some surviving bricks left behind.  Good Chicago bricks, finding a new home at a place where their character -  if not their provenance - still finds respect. 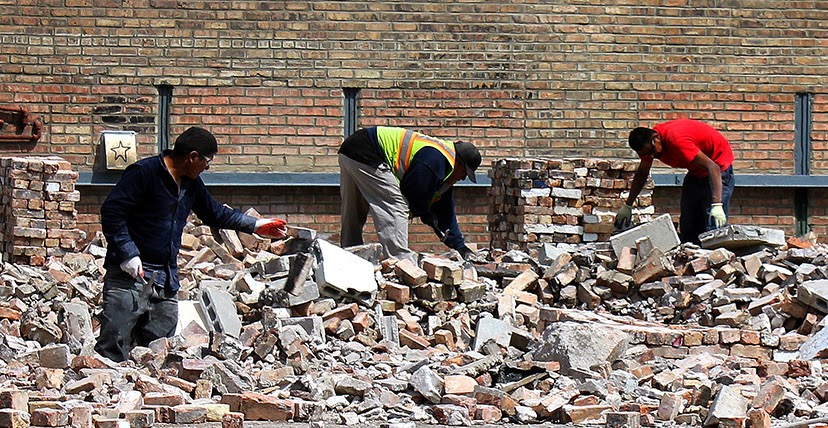 Spent winter and summer breaks during architecture school dressing bricks from a demolished barn in the Dales in 1983. They transformed into a fantastic courtyard home in a Yorkshire village.

I've noticed that Chicago brick used on the side or rear of buildings has this greyish, tanish hue that I don't seem to see in brick in other cities.

I absolutely love all of the brickwork and masonry in the Chicago area. It gives the city a very timeless look that is hard to find anywhere outside of Europe. I know that even though brick is super strong and a great building material that sometimes it does require repair and touch up work. I wanted to learn a little more about the process and found out about a thing called tuckpointing. Kind of a cool, albeit time consuming, idea; that's what I get for being addicted to HGTV I guess!

Thanks for your great information, the contents are quite interesting. Food Grade warehouse Chicago