Polemically, the second Chicago School of Architecture was based on steel, glass and the grid, a supply-chain cocktail of standardized units repeated and extruded to massive scale.  That key formula was central to Chicago's original subway, expressed in a continuous platform 3,500 feet long, at the time of its 1943 opening a world record.  That continuity was tempered by the supporting columns being painted in a different color for each of the three named stations, and physically sliced up for good when the Washington Station was closed for the construction of never-used connections to the never-opened Block 37 superstation.

Now, however, after a $10 million renovation that was completed this summer, Harrison, the next subway station to the south, has become a striking exercise in standardization, repetition, and extrusion.   In this CTA photograph of the station in its previous state, it's a functional if slightly grungy workaday vision, tan columns, and gray ceiling, mottled with age.
In its freshly renovated state, however, the station, at least for the moment, has been transformed into a singular, Egyptian-scaled vision.  It all builds out of just a few basic elements - classic i-beam columns painted white, stretching, Avenue of Sphinxes-like, into infinity, down a seemingly endless platform, between identical white-metal light boxes, and supporting a great, rounded central vault bisected by a stream of rounded light fixtures and ringed with alternating stripes of light and shadow.

It's worth a visit, before it starts getting beat up from use.  Go in an off-hour, and wait until almost all the people are gone.  This nearly surreal vision, bleached monochrome, abstracted of all details, is a haunting metaphor for our antiseptic mass-standardized, supply-chain world, beautiful and unsettling at the same time. 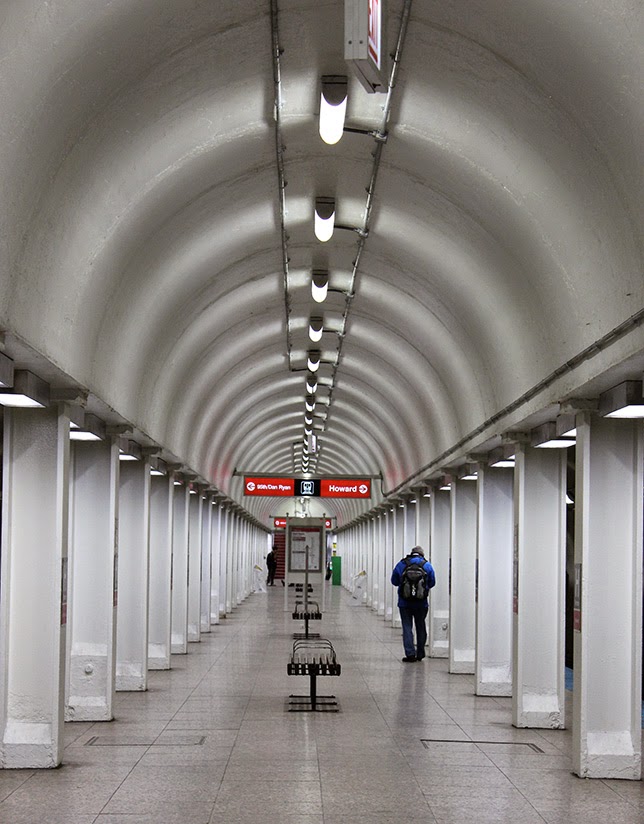 more of an exercise of economy, "here's a few cans of cheap white paint, paint everything"

This is proof, that paint can do wonders.