No, Apple didn't decide to go pre-fab for the new store it's announced for Pioneer Court, the public plaza fronting Michigan Avenue just north of the Chicago River.  For that project, neither a design or a ground-breaking date have yet to be revealed.

Instead, the swooping, curved structure at Pioneer Court is another example of the virtual world suffering an outbreak of the material.  Retailers whose entire existence is on-line are finding themselves going on benders of physical presence.

Even Amazon, after taking out Borders and other mainstay booksellers with its aggressive and omnipresent website, is now rubbing it in by opening its own "bricks and mortar" bookstore in its own hometown of Seattle.

To be sure, Pop-up stores are not uncommon, and Pioneer Court has been a prime location for them. Just last week, smartphone case-maker Otter had its own Pioneer Court pop-up just south of Tribune Tower.

The white whale now beached on the south end of the plaza is entirely different story. Zaha Hadid's Chanel Mobile Art Pavilion it's not, but it's still the most ambitious pop-up construction Chicago has seen to date.  It's the creation of an outfit called withme, a retail logistics company that began in China in 2011 and is now headquartered in Las Vegas, where it created a 20,000 square-foot pop-up shop in the Las Vegas Western hotel for on-line retailers Zappos.

The Pioneer Court construction is the debut of the company's ShopWithMe retail stores, which their website modestly describes as "the first portable, all-in-one pop-up store solution for brands and retailers to showroom and sell their products in a futuristic environment, anywhere in the world." Future appearances are listed for five cities, from New York to San Francisco, with "Info Coming Soon." 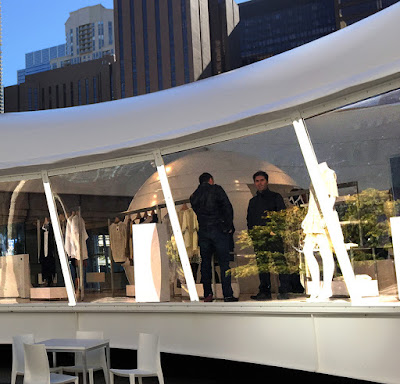 For Chicago, the pavilion features the products of "eco-friendly" women's jewelry and apparel retailer Raven + Lilly, based in Austin, Texas, where it has a retail store, and TOMS eyewear, footware and accessories. which also has five bricks-and-mortar stores across the country, including one in Chicago's Wicker Park. 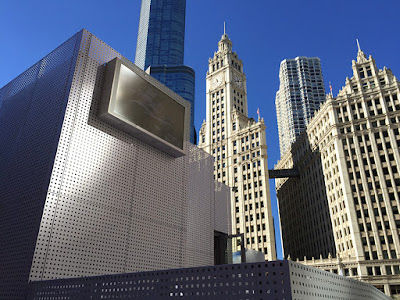 The white perforated panel facade of the Pioneer Court installed sets off well against the cream-colored terra cotta of the Wrigley Building just across the street. 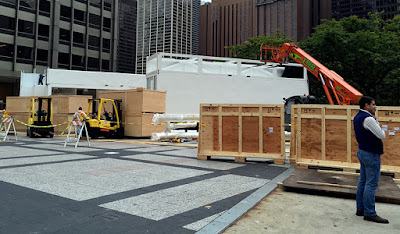 For a temporary structure, it was an ambitious and intricate construction process, as pre-fab components were unloaded, unboxed and assembled into place like a giant 3-D jigsaw puzzle. 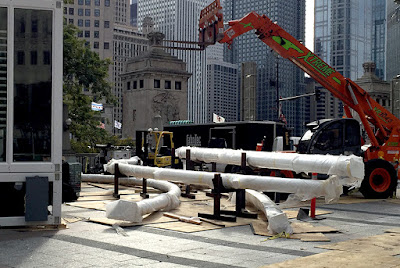 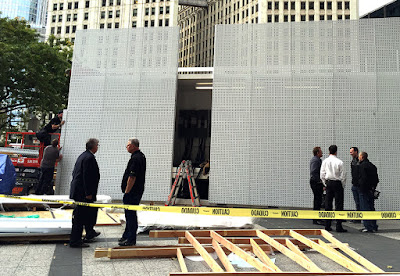 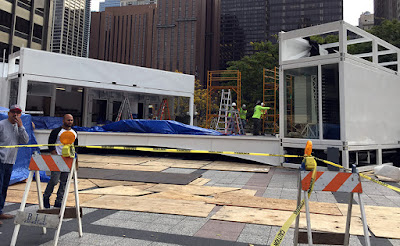 It looks a bit like a covered bridge suspended between the two end pavilions, one of which with a fold-back ramp attached to get people up into the store. 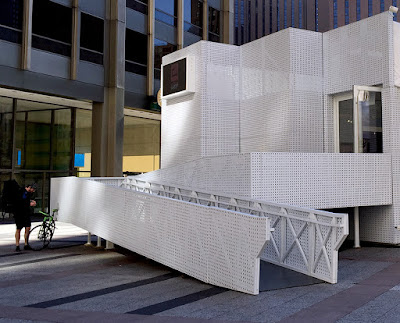 It's only scheduled to be open until this Friday, November 6th, so check it out while you can.  And watch for the dismantling process after that, which should be pretty interesting in itself. 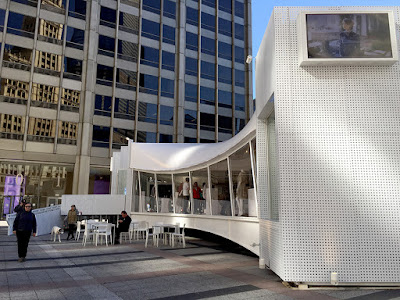 It's like Show Boat, but with tractor trailers instead of the boat.  Is this the future of on-line retailing?