Burnham & Root Luzon Building in Tacoma to be Demolished 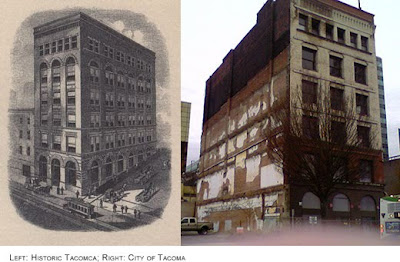 Less than two years from an announcement of what would be prove an abortive $6 million renovation plan, the now abandoned Luzon Building, designed by Burnham and Root in 1891 for the Pacific National Bank, has been declared a "dangerous building" in danger of collapse and will be demolished later this month. According to biographer Donald Hoffman, the six story building, on a sloping site, is actually of timber construction, as can be seen in this photograph from an engineering report from Swenson Say Faget that documented the structure's current sorry state. The firm's work survives in two buildings in San Francisco, the Mills Building, and the Chronicle Building, recently renovated as part of a new Ritz-Carlton Club Residences. 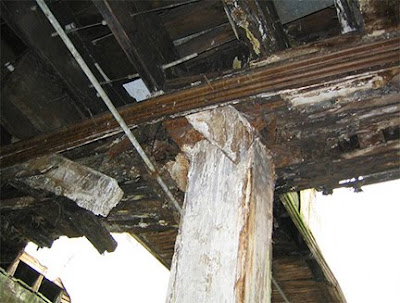 Heres what I dont get about historic or old buildings and property owners; If you are a pig, and dont invest in your property and let it rot then it's ok to tear it down. If you maintain it over the years, then you are forced to abide by authoritarian rules on what you can do with your property. It seems to me the wrong group is being punished. To let a building rot to the point of public saftey hazard should be a felony. If you cant mantain it, you dont deserve to own it and should be forced to sell it pay charges and fines.

Look at our own fair city; Slum lords who let their buildings wilt in the west loop during the 40s, 50s and 60s eventually made more money turning them into parking lots, whereas people who tried to mantain them are stuck with protected buildings on property not generating full income potential.

Of course, a partial answer is that being lucky enough to own a beautiful work of art entails responsibilities towards posterity.

On the larger level, of course, you've hit the $64 question right on the head. What makes architecture unique and extraordinary as an art form - its intersection with functionality and the material world - also leaves it vulnerable and problematic. It's far from immune from injustices of the world in which it exists.

You're absolutely right that if someone can't maintain a building, they shouldn't own it, but in our legal system the processes can be so drawn out that by the time remedial action can be ordered, the damage is very often beyond repair.

No answers, but certainly the right question.

Can the timbers be stabilized or supplemented? In other words, is the main stumbling block the money? Or is the building doomed no matter how much money is available?

If the issue is just the money, then there is a solution. Public money. Just like the Medinah Temple/Tree Studios were saved with the help of a $20 million TIF grant.

Public officials in Tacoma would be serving the public good by allowing use of public money for the stabilization of this building. Keeping Tacoma special has a financial benefit that cannot be measured but is worth pursuing.

The city actually refused offers to stabilize the building, and the city manager forced the demolition- charging the new owners (who were attemping a full rennovation of the building) for the demolition - a cost of approximately three times the estimated price of stabilization - which the city would not allow.

Now the same fate will probably be befall the 1893 Italianate-styled Old City Hall. The city has learned nothing.