The Forbidden Volume- the story of the Jung's Red Book

Sara Corbett has a great piece in today's New 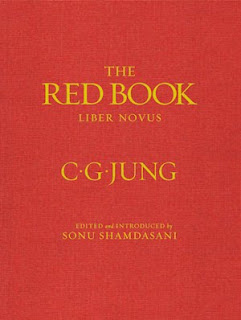 York Times Magazine of the story of Carl Jung's The Red Book, the product of the Swiss psychologist's dark night of soul, 16 years of recording's immersion in his own "troubling visions and . . . inner voices." For the better of a century, Jung's book has been withheld from publication, the last 23 years in a Zurich safe deposit box.

Now, however, The Red Book, named after the color of its cover, is set for a 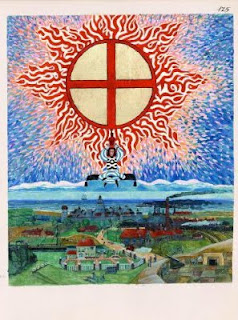 mid-October release, complete with an English translation and copious footnotes by scholar Sonu Shamdasani. At $195.00 list, it'll be no cheap thrill, but Amazon is taking pre-orders for $105.30. The samples of the fantastic illustrations up on Amazon seem a cross between William Blake and H.P. Lovecraft.

When I was young, I found myself fascinated by Jung's work and thought, making my way through most of the volumes in the spare, handsome designs of the Bollingen series from Princeton University Press. They've been up on shelf, untouched, ever since, through all the subsequent years of debate on whether Jung was a seeer, mystic or charlatan, but early obsessions seldom lose their power entirely, and I've got my order in. Read Corbett's The Holy Grail of the Unconscious here. There's an amazing movie in there, but I doubt the Jungs will approve.