Bates, Bad granite, Beasts Mythical, a Big Balloon, and more - news notes from all over

Two more events for the October calendar - And in this corner, going up against Jason 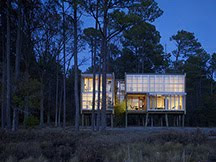 Payne at UIC and Christian Veddeler at the AIC, Roderick Bates will being talking about the work of his firm, Kieran Timberlake, at Archeworks, Monday, October 19 at 6:00 p.m. Then on Saturday, October 24th the Pleasant Home Foundation will offer a rare interior tour of Joseph Lyman Silsbee's May Chapel at Rosehill Cemetary, with a 10:00 a.m. tour of the historic cemetery.

Legends of the Fall(ing Granite) - following up on a story we broke about a month ago with the help of our indefatigable correspondent Bob Johnson, 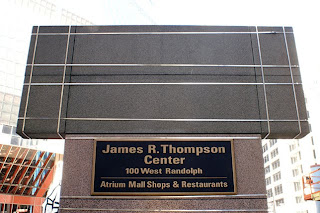 Blair Kamin had a report on how the 1,000 granite panels that make up the arcades and diminishing monoliths at Helmut Jahn's 1985 Thompson Center have come to be considered "attachedly challenged" and will all be removed, at a cost of a cool million, to avoid the prospect of falling panels making pancakes of passing pedestrians. According to the Sun-Times' David Roeder, the work will begin by the end of the month and take eight weeks, with no word yet of when or with what the panels will be replaced with, or how much that will cost.

Calatrava and the Unicorn - also on the Blair 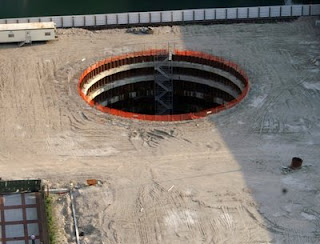 Kamin front from last Friday, an interview with Santiago Calatrava in which the architect speculated that Chicago Spire might still get built. Then again, this week Crain's Chicago Business reported that the Spire's developer Shelbourne Development, is about to be evicted from its $10 million sales center in the NBC Tower, where it hasn't paid rent since April. "My personal wish is that is not dead," was Calatrava's distinctive phrasing. My personal wish is that my intense personal relationship with Elīna Garanča is not dead, either, but, in both cases, I wouldn't recommend placing any big bets on it.

401-(k)0'ed - Time Magazine has a report on another toxic gift of the Reagan era, the 401(k), which encouraged large corporations to dump pensions for their employees, and the big financial firms to fleece them on the way out, leaving them holding the bag after the financial collapse. The average 401(k) balance in 1998: $47,000; by the end of 2008, $45,519. Inflation-adjusted, you're down 26%. Five-year return: - 0.5%. You think the Social Security crunch is scary? Wait until you start reading about the looming 401(k) washout, when millions of Americans find themselves having exhausted their unexpectedly diminished savings while still having decades left to live.

And now for something completely different.
In honor of Falcon(!) Heene, a really big balloon: 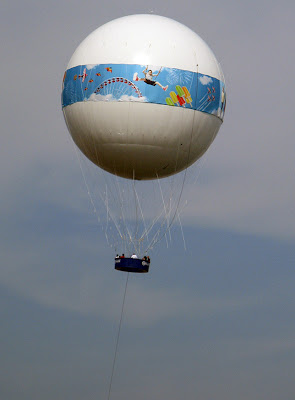