Can we throw in the Easter Bunny for good measure? 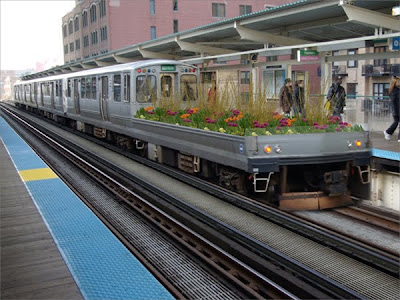 Damn, it's cold. And it's only going to get worse. Soon the palms will disappear from Marina City for the season. The trees will scream their fall death throe hues. Their leaves will lose their grip on the branches, waft briefly in the wind like grace note kites, drift gently to the ground and disintegrate into a brittle mulch. I'm not a fan.

And so I was bit heartened to come across a project that artist Joe Baldwin is trying to get off the ground and up onto the "L" tracks - the idea of a "mobile garden" built on a public transit maintenance flatcar. He's creating an organization, putting up a Facebook page, and soliciting funds with the idea of having the mobile garden coupled to a CTA train, and later rolled out to other cities in the U.S., Europe and Asia. 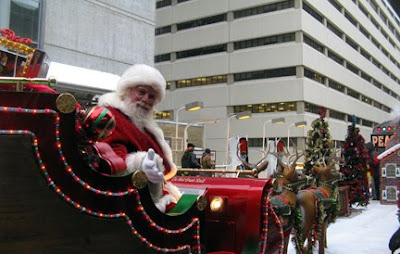 If it works for Santa, why not for a garden? Baldwin reports the CTA as responding, "If you think that it is possible to raise funds to cover the costs associated with running the charter, having additional staff, and the liner, I will not tell you we can not do it. I am happy to come up with some figures for you." To me, that reads as a not-so-subtle brushoff, but Baldwin prefers to see it more as a challenge.

And really, what could be a more encouraging in early spring, when there's still enough chill in the air to make you wonder if winter will ever really leave, to be standing, shivering, waiting for your train, only to see a beautiful garden suddenly rolling by, a harbinger of better times just down the road?

You might have the makings of a new Chicago tradition.

(We're working hard on finishing up the October calendar. No, really.)