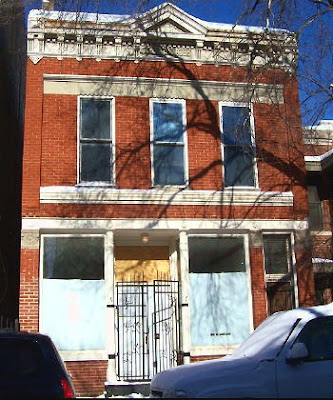 Although the smart money was that the wheels had been greased for denying landmark protection to the house the legendary preservation activist Richard Nickel made his home for the last three years of his life, before his 1972 death in the demolition rubble of Louis Sullivan's Stock Exchange Building, the Tribune's Blair Kamin reports that the Commission on Chicago Landmarks, by a vote of 7 to 3, yesterday actually overruled staff recommendations not, as usual, to water them down, but to landmark the Nickel House. However, as we learned from the case of the Farwell Building, there's nothing that can't be reversed when the right people tighten the screws, and the landmark designation won't become final until the City Council approves it. But with all the depressing news coming out of Michael Reese Hospital, where the city is frothing at the mouth to wipe out Walter Gropius's architectural legacy in Chicago, the pleasures, however transitory, of a small victory like Thursday's vote are too tempting not to savor. Just don't inhale.

(photograph by Karin Langer courtesy of Preservation Chicago.)
(did I mention we're in the home stretch on the October calendar?)

well now that we've officially lost the olympics bid, hopefully the city will not be so anxious to bulldoze michael reese into the ground ... but it's not safe yet until a redevelopment plan is put into action.

You have ZERO idea what goes on behind the scenes at CCL or how busy the staff is. I can assure you that everyone is working as hard as they can to use what power they have to protect these resources. Instead of slamming the people who are out there doing their job, why don't you use your blog to educate people as to WHY they're important? Stop assuming everyone has or should have the same priorities as you.