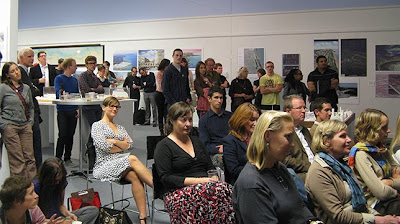 Here's a few of pictures from last Tuesday, when I the extreme pleasure of again struggling heroically to cram 30 minutes of material into 20 slides and under six minutes, the basic ground rules for the entertaining and informative Pecha Kucha Nights, which bring together people from all creative persuasions in a setting made even more congenial with happy beverages at popular prices. Last week was a special Burnham edition, held at the Chicago Tourist center, 72 E. Randolph, with the excellent exhibition, Big. Bold. Visionary. Chicago Considers the Next Century, in the background. Be sure not to miss Bold.Bold - it's a great exhibition, but only open through next Sunday.

Here you see me doing my best to hide behind the podium. 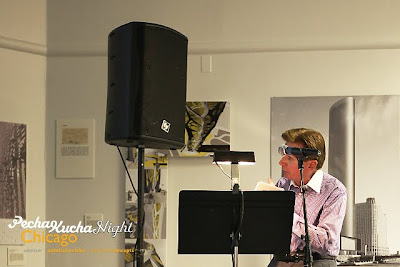 I talked about something I knew nothing about until a couple weeks ago, an incredibly fascinating and largely forgotten Chicago event, the 1948-49 Chicago Railroad Fair, which took place on a 50-acre site on the lakefront just about where McCormick Place is now, and was the largest assembly of equipment from throughout the history of railroads ever, an incredible show of confidence at the very time railroad passenger travel was entering its death throes. Walt Disney claimed it was his inspiration for Disneyland. I hope to be following up with an account of it here. 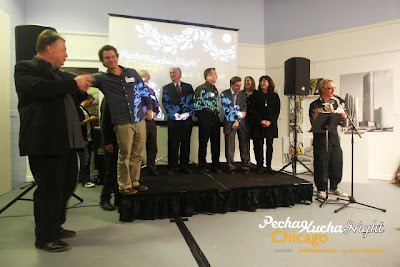 At the end of each Pecha Kucha Night, all the presenters are brought together for a group picture, both to give everyone a final bow and provide police a group mug shot should they still be looking for suspects. Architect Clare Lyster had to leave for another event, filmmaker Thomas Gray is behind someone, as is, most probably, Kyle Reynolds, but the other participants, all of whom gave fascinating presentations are, from left, architects Brad Lynch and Michael Wilkinson, cartographer, graphic designer and historian Dennis McClendon, Millennium Park impresario Ed Uhlir (it was his birthday, which was a good thing, as host Peter Exley - far right in the photo - had everyone in the house sing Happy Birthday to him. The bill from ASCAP will come later), Burnham Pavilion lighting designer Tracey Dear, your obedient slump-shouldered servant, to my left, co-host and Chicago Director of Cultural Planning Julie Burros, architect Elva Rubio, and the puckish Mr. Exley.

I want especially to thank all those attending who came up to me with kind comments about my various writings, and the very nice woman who thought I was the cocktail waiter and give me such a lovely tip. 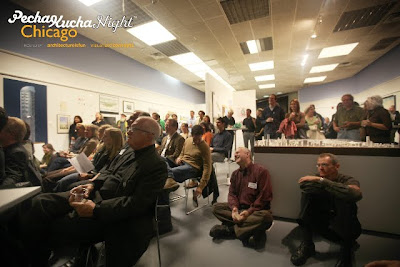 For its next Chicago outing, on December 1st, Pecha Kucha returns to its usual stomping grounds at Martyr's, 3855 North Lincoln, where you not only will have access to drink, but to food, as well. Presenters have not yet been named, but you're guaranteed a great time.