While Amazon's Kindel reader doesn't threaten to eliminate the printed book anytime soon, the march of technology may move much quicker in the music sector. The Chicago Symphony Orchestra announced last week that it will be releasing a recording of Myung-Whun Chung's Shostakovich Fifth, which he conducted with the orchestra just this past September. But you won't be able to buy it on CD, LP, or 8-track. It will only be available for online download, exclusive to iTunes beginning January 8th, then breaking into wide release through "additional digital music services" on March 11th. The tariff is $7.99. The recording is through the CSO's in-house Resound Label, whose previous issues include 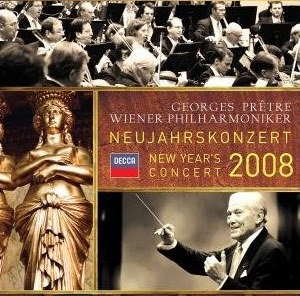 CSO performances, conducted by Bernard Haitink, of the Mahler 3rd and Bruckner 7. Both of those are available not only through the Ted Stevens Pipes, but on hard copy, as well.

Not to be outdone, Polygram's Decca label will sell you a recording of the 2008 Vienna Philharmonic New Year's concert, conductor Georges Prêtre, despite the fact that not a single note has yet been played. For $11.99, you can pre-order on iTunes and download on January 4th. Troglodytes still clinging to their CD players will have to wait until January 14th. All the tickets for the concert are long gone, but if you're thinking ahead, beginning January 2nd, you can go to the Vienna Philharmonic's web site to register for the lottery through which tickets for 2009 will be distributed. Don't dally, however, registration closes January 23rd. Tickets run a mere 680 Euros (almost $1K for you or me) down to 30 Euros for a seat in the sink of the backstage plumbing closet.

On a side note, BBC3 is re-running a number of this past season's Prom concerts, closing on January 4th at 1:00 P.M., Chicago time, with Daniel Barenboim conducting the Vienna Phil in Schubert 5 and Bruckner 4. The complete list of the remaining broadcasts can be found here, and BBC3's internet stream here.