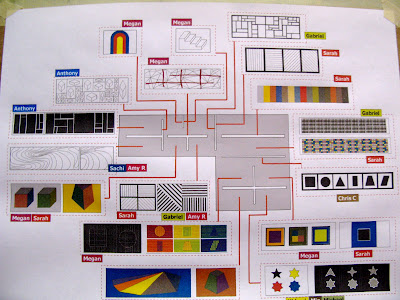 Edward Lifson, on his New Modernist blog, has a spectacular post on the even more spectacular exhibition, Sol LeWitt: A Wall Drawing Retrospective that will feature the work of the late artist Sol LeWitt, who died last April at the age of 78. It's being mounted at MASS MoCa, which occupies a complex of 26 century-old former industrial buildings in North Adams, MA. The site of the exhibition, the 27,000 square-foot Building #7, was picked out by LeWitt himself during a 2004 tour of the museum. 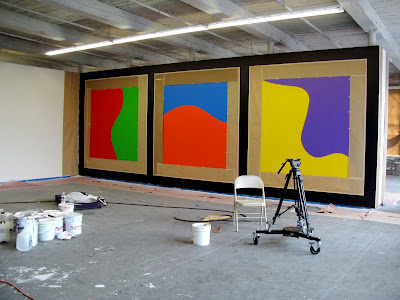 Lifson's photos offer up a great study of the process of recreating on museum walls over 100 pieces made across a span of 40 years. It's especially neat how Lifson shows the geometries of ladders, scaffolding, tools,the volunteer's clothing and even the vectors of their bodies, all interacting with the geometries and chromatics of LeWitt's unfolding designs. Despite all the activity you see in the photos on Lifson's post, setting up the retrospective still has a long way to go. The official opening isn't until November 16th. Baring death, disability, or abduction by aliens, however, you won't have any excuse to miss it: the drawings are scheduled to be on display for the next twenty-five years.

Check it out - including some videos - here.