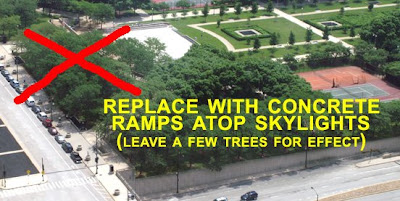 Now it gets interesting. The outcome of the opening skirmishes in the battle over the Chicago Children's Museum land grab in Grant Park, with the Chicago Park District, Chicago Plan Commission, and Chicago City Council all voting to authorize the project, were predictable. The membership of each of these bodies is a creation of Richard M. Daley, who personally appointed all (in the case of the CPD and CPC) or an overwhelming number (in the case of the City Council) of the members, most often with the primary emphasis on unquestioning loyalty and an unspoken understanding that each candidate can be depended upon to rubber-stamp every mayoral whim. (According to former independent alderman and political analyst Dick Simpson, 25 of the city's 50 alderman have never cast a single vote against the mayor.)

Now the battle goes to the court, where the outcome is less foreordained. It was the courts - not the City Council (which also fought tooth and nail to fill up Chicago's lakefront with aldermen's pet projects) nor the State Legislature, - that finally handed A. Montgomery Ward the decisive victory in his own battle to protect Grant Park in the early 20th Century. And, a century later, it will be the courts that will be the final arbiter of the museum's corrupt campaign.

It's a high stakes game that could go either way. If the mayor lucks out, and gets assigned 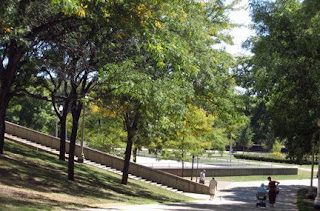 submissive judges that owe their appointment to his organization, he could get a ruling that effectively wipes out the A. Montgomery Ward rulings and all protections for Grant Park, leaving it Mayor Daley's personal playground on which to build whatever castles, Olympic or otherwise, he may choose.

But don't bet on it. Last year, the Chicago Park District entered into a sweetheart deal with the clout-heavy Latin School of Chicago in which it put up $2 million towards the cost of a soccer field in Lincoln Park, in exchange for privatizing the field for the school's exclusive use for the most desirable times of the week. Neighborhood activists filed suit, and this past May, Cook County Judge Dorothy Kinnaird, calling the case "very troubling" and riddled with secrecy, issued an injunction against the deal. After her decision was affirmed unanimously by a four judge panel of the state appellate court, the Park District folded and quashed the deal.

Should such a scenario play out in the Children's Museum case, would the mayor be in danger of not only losing on the museum, but of having recent Grant Park constructions such as the Harris Theatre and Pritzker Pavilion, whose top half was reclassified from a building to a sculpture to evade other existing restrictions on construction in the park, being declared illegal, as well?

If the lawsuit reaches the Illinois Supreme Court, where A. Montgomery Ward sealed his victory, would Justice Anne Burke, wife of City Council powerhouse and Museum backer Ed Burke, recuse herself? As I said, it could get interesting.

Save Grant Park has begun a Legal Defense Fund to help defray costs of the anticipated lawsuits. You can contribute on their website here, or send a check to: