Marina City: in Cans, Preserved, and with Angelina

You have only until through Sunday, June 22 to view the entries in Canstruction 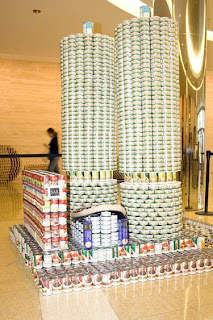 Chicago 2008, where 80,000 pounds of canned food are used to build 20 large sculptures. For this year's winner, a team from 4240 Architecture built Marina City's twin towers out of cans of tuna, with cans of corn marking the transition from the parking to the residential floors. Lighting design firm Charter Sills & Associates recreated the House of Blues, as well as a Hotel Sax made out of Campbell's soup cans.

The photo here is from the invaluable Marina City Online website, where you can also find a report on the competition. A jury that included Check, Please!'s Alpana Singh, Heaven on Seven chef Jimmy Banos, engineer Craig Vespa and architect Zoka Zola awarded their "juror's favorite" award to "CANtastic Voyage," created by a team from Nagle Hartray Danker Kagan McKay Penney Architects, can be seen here, in one of a sequence of photos taken at the event by Crain's Chicago Business.

You can view all the entries yourself at the Apparel Center, 350 W. Mart Center Drive, through Sunday. Price of admission: one can (and not the one you sit on.) On Monday, 6 P.M. - 9 P.M, a DE-CANstruction team will disassemble the sculptures and ship out the cans of food to the Greater Chicago Food Depository.

Elsewhere on the Marina front, the move to landmark the i 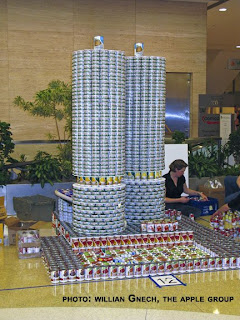 conic Bertrand Goldberg complex advanced this Monday with a session where 50 unit owners and residents heard from Chicago's premiere preservation architect, Gunny Harboe, Landmarks Illinois' Advocacy Director Lisa DiChiera and historic preservation consultant Victoria Granacki discuss the process and benefits of landmarking. Marina City Online not only has a report on the session, here, but also offers up an audio recording of the hour long session.

Also on Marina City Online is a short piece including a link to the trailer for a film which prominently features Marina's twin towers, the Angelina Jolie/James McAvoy/Morgan Freeman thriller Wanted, which did substantial location filming in Chicago. It doesn't open until June 27th, but Sun-Times movie critic Richard Roeper is already calling it "insanely entertaining" with "some of the most breathtaking representations of our skyline I've ever seen."