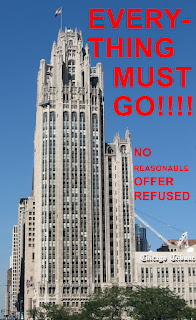 letter to Tribune Tower, the Gothic-styled skyscraper by Howells and Hood that has been the newspaper's home since the building's 1925 completion, and which was designated an official Chicago landmark in 1989.

In a note to the company's beleaguered staffers posted on the Trib Co. website, Zell wrote he's looking to "maximize the value" of the corporation's real estate, which translates into he's desperately shoveling assets into the boiler of the Trib Co. locomotive as he struggles to make it to the other side of the precipitous trestle of corporate debt that's collapsing with accelerating speed behind him.

The irony, of course, is that the newspaper business used to be akin to a license to print money, leaving stockholders with an addiction to obese profit margins which, in the endearing herd mentality to which speculators are prone, they fully expected would go on, uninterrupted and forever.

Even as the business model of traditional print media was rotting fast at its very roots, Zell engineered a buyout of the Tribune Company for $8.2 billion, a massive over-valuation that has left the corporation crushed under a debt load that declining cash flow cannot long sustain. Still another irony is that while everyone's been worrying about the fate of supposed weak-sister Chicago Sun-Times, ultimately the Trib may be in even more dire financial straits. Reports of a possible 2009 default began floating through the media in April.

Zell has made a grand tour of his properties, which include the L.A. Times, assuring staffers of his commitment to making newspapers a viable concern. Unfortunately, that takes time, and time is what Zell doesn't have.

So he's falling back on his roots as a scavenger, dismembering the Tribune Company in what amounts to a vicious circle. He's selling of the best assets to pay off debt, thereby dramatically reducing the cash flow available to service the remaining debt, which will be reduced by another wave of sell-offs of less valuable assets, with another reduction in cash flow, and so on and so on, down to zero.

It's fascinating to watch - like witnessing the dissection of a pig - but odds are in the end the results will the same . You get a great show, you learn a lot, but all you're left with is a dead pig.

Just as Conrad Black sold off the Sun-Time's real estate, the Tribune sells off the Tower, the proceeds 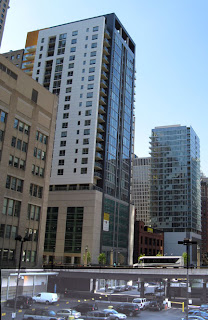 go, not into the paper, but to pay off debt, and the cost of rent is piled onto the Trib's operating expenses.

Crain's Thomas Corfman estimates Trib Tower could go for as much as $160 million, which would be only slightly more per-square-foot than Bank of America just got in selling off, for $190 million, the 1.2 million square foot Field Building, the last Chicago skyscraper built after the onset of the Great Depression.

An enticing component of a potential Trib Tower sale is a one-acre surface parking lot (at the bottom in the adjoining photo) just behind the tower, facing St. Clair, a street that this spring has seen the completion of residential high-rises Avenue East (left in photo, behind the Inter-Continental), and Brininstool & Lynch's 550 N. St. Clair (right in photo).

In other news, reports of architectural fragments, eerily similar to the kind found 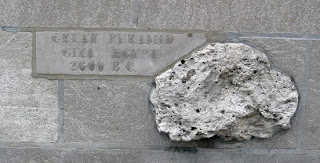 embedded in Trib Tower facades, appearing on E-Bay have proved to be false. Also turning out to be apocryphal is a reported midnight sighting of Zell standing before those same facades, power chisel at hand, as a waiting motorcycle and sidecar idled on Michigan Avenue.