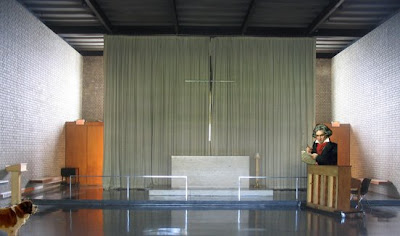 Back in the 50's, architect John Vinci, when he was still a student at IIT, engineered a trifecta. He booked Duke Ellington and his orchestra to play at the annual dance, he got IIT to let him use Crown Hall as party central, and he got to see Mies himself, comfortably ensconced in a Barcelona chair and puffing on a cigar, enjoying the Duke's music on that memorable night.

be bringing music to Mies. Their Sounds and Spaces event for this winter will begin at 4:00 p.m. with the CCM brass and strings playing Giovanni Gabrieli's Canzona per Sonare No. 1 and Spiritata and Sonata Pian'e Forte a 8, composed 400 years ago for the acoustics of Venice's Cathedral of St. Mark, in Crown Hall, the Cathedral of St. Mies.

The audience will then move over to a second Mies' creation, the Robert F. Carr Memorial Chapel, a/k/a "The God Box", where they will hear Ludwig van Beethoven’s String Quartet No. 9 in C Major, Op. 59, No. 3, Razumovsky. The evening finishes up at 6:30 with a reception with the players at the Pritzker Club in the Rem Koolhaas designed McCormick Student Center.

Tickets to the event, co-sponsored by the Chicago Architecture Foundation, AIA, and the Mies Society, are $50.00. Free Parking! Advance purchase is required. Buy tickets, by phone at 312-225-5226, or on-line. Information on-line includes Goethe's striking variant on his famous quote likening architecture to frozen music: "Architecture is not so much frozen music, as music fallen silent." Much better, no? When you stand in a great structure like Crown Hall, even silence has the energy of presence.