This Saturday: In a Landmark the Archdiocese wanted Destroyed, a Lecture on Catholic Church Achitecture in Chicago 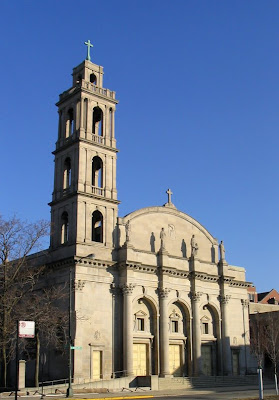 Saturday, February 28th at 3:00 P.M., Dr. Denis McNamara, architectural historian and author of Heavenly City, will give a lecture on

the architecture of Chicago Catholic Churches at one of its most beautiful examples, the Shrine of Christ the King on Woodlawn just south of the University of Chicago, which wouldn't be here today if the Archdiocese had had its way. Admission is free, but you need a ticket, and can get one by calling 773/363.7409.

It seems like only yesterday that the Chicago Archdiocese was sending its high-powered lawyers into courts and hearing rooms to declare they had the right to destroy historic churches, many among Chicago's most beautiful buildings, at will and with impunity. It was 2003, and the Archdiocese was hell-bent on demolishing Christ the King, then known as St. Gelasius, and no one was going to stop them. especially since they had in their back pocket an amendment to the landmarks ordinance pushed through by former 42nd ward alderman Burton Natarus that exempted churches from being declared landmarks without their consent.

They hadn't counted on two things, however. First, the forceful opposition of Arenda Troutman, now a recently sentenced boodler, but then the powerful alderman of the parish's ward. Second, the Chicago Corporation Counsel's discovery of what should have been an obvious fact. As there had been no services held at St. Gelasius for years, the building no longer functioned as a church, and was ineligible for the exemption. In 2004, St. Gelasius was declared an official Chicago landmark.

Bowing to the inevitable, the Archidiocese turned over St. Gelasius to the Institute of Christ the King, which had already taken on and restored the historic St. Mary's church in Wausau, Wisconsin.

Built in the 1920's by famed church architect Henry J. Schlacks, the handsome renaisssance revival building at 6401-09 South Woodlawn was opened as St. Clara, run by the Carmelite Fathers. Clad in gray limestone, Schlacks' design included a 120-foot-high bell tower, larger than life statues of the saints adorning the roofline, and a handsomely appointed sanctuary, seen below in a vintage photo. 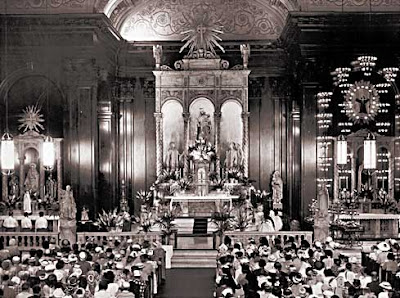 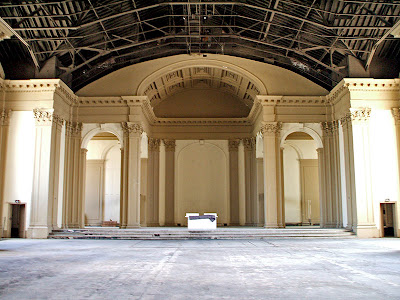 That interior was destroyed in a 1976 fire, and the church, now renamed St. Gelasius, led a troubled existence in a declining neighborhood. The ornate ceiling has never been replaced, and while the new owners have taken steps to secure the building with a new roof and critical repairs, the sanctuary remains an open shell, taking on an almost Miesian quality with classical pilasters standing beneath vaults of bare exposed metal. 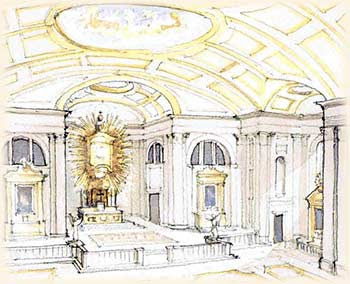 A design for a restoration based on baroque principles by Abbé Alexander Willweber, who was also behind the St. Mary's restoration, with Notre Dame alumni William C. Heyer as the local managing architect, awaits additional fund raising. The Institute estimates it will cost about $7,350,000, and you can make your own donation here.

McNamara's Saturday lecture is particularly timely, as the Archidiocese is poised to smash still another beautiful church designed by Henry Schlacks, the long closed and poorly secured St. Boniface, into dust. A local group of activists is racing against the clock to confound the Archidiocese's scorched earth culture to repeat the miracle of St. Gelasius. 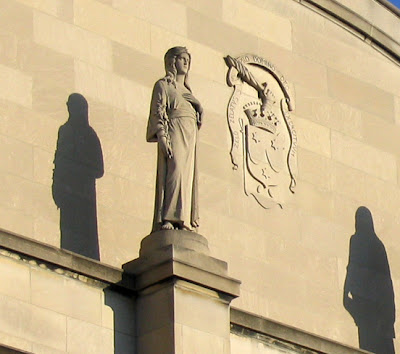