Big Red is Back 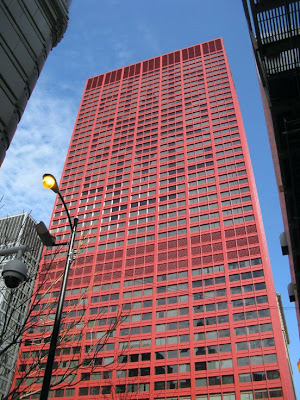 Since it's 1972 completion, the 601 foot-high CNA Plaza has had a dominant role in Chicago's skyline, not so much from the quality of its architecture, as from its fiery red color. It's a Miesian box devoid of Miesian grace - a heavy-boned structure with inset windows like morning-after eyes. The thick framing actually provides a larger canvass area for the red paint, helping the building stand out even more. 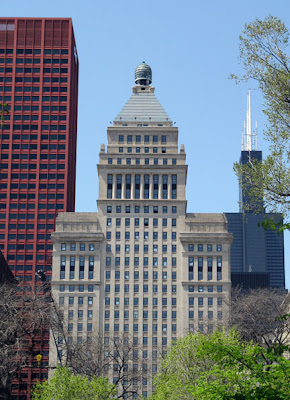 Over the years, CNA retrenched its operations into Plaza III alone. In 1999, Plaza II reverted to the gray of Naess & Murphy's original 1962 design. On III, now the CNA Tower, the red paint faded to a very tired, very flat ghost of its former glory. Until now. You can see the difference below. 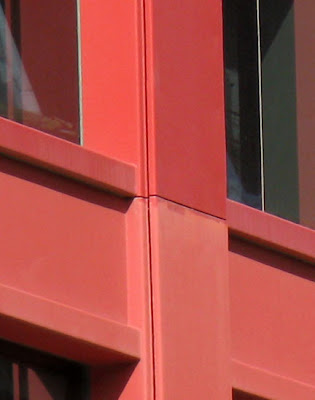 Close up, the new paint job seems more orange than I remember, but from a distance it resolves into a deep flame red. The CNA now pops in the skyline with renewed vigor. 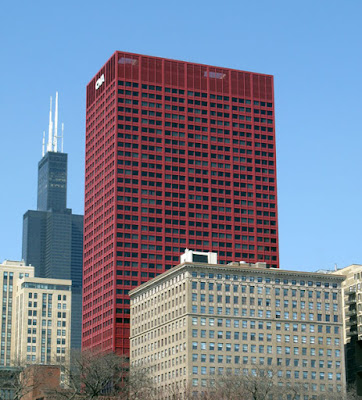 fantastic article! why was red the chosen color?

That red/blue contrast reminds me of the colors of the Chicago flag. Still, every time I look at the CNA building I can't help but remember that woman who was cut in half by glass falling out of one of those inset windows.

It was red (really russet) just to stand out from the usual gray Mies. Why russet? It was familiar on steel, like the Golden Gate Bridge or Calder's Flamingo.

My Dad works as a building carpenter in CNA Plaza... but some of the stuff you shared in this article was news to me, so thanks for pulling it all together. Nice job!

I noticed that the photos you shared show the Olympics window display setup in daytime light. My father is also involved in making those happen and I've been archiving the different messages over the years:
http://steveandamysly.tannerworld.com/features/cnaplaza/

I thought this particular color was originally used because it matched the color of the CNA logo.

@Billy W - Correct, the color red is to match the CNA logo.