If Zumthor Came to Chicago 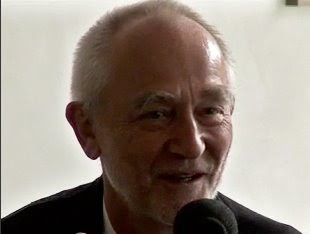 " . . .and all the madonnas are smiling." (click to view video) via vernissage tv.

A life, a real life, needs lots of patience. A good life needs a lot of patience, and with work it's the same.

Those are the words of Swiss architect Peter Zumthor, who on Sunday was named the 2009 winner of the Pritzker Prize, architecture's Nobel. Zumthor's small body of work has won international acclaim for structures that

combine a a deep sense of spirituality with a simplicity that is not reductive, but eloquent. The video above is from a press conference at the 2007 opening of the Kolumba Art Museum, built out of the ruins of a Cologne church that had taken a direct hit from an aerial bomb in 1943, the year of Zumthor's birth.

At that press conference, Zumthor continued,

Nowadays we are used to the fact that a lot of museums are part of a “marketing strategies” campaign. For cities, the art plays a minor role, they are interested that the architects come up with a sensational shape that attracts people for at least a year or two, maybe even five or seven . . .this is the famous “Bilbao effect,” a worldwide phenomenon.

But here – and you can feel it – it’s different. It’s the opposite meaning. It all started with the art, the collection and its substance. Here people still believe in the art. It’s not just a good investment. Here people believe in the inner values of art, the spiritual values, it’s ability to make us think and feel. 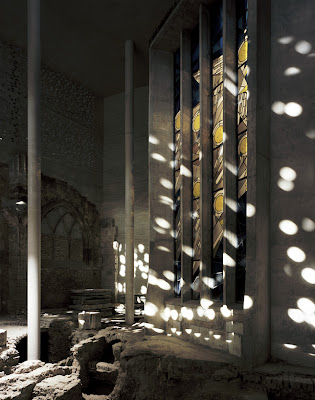 In a cell phone interview with Tribune architecture critic Blair Kamin, Zumthor talked of visiting Chicago and the IIT campus. "I respect Mies a lot," he told Kamin. From the videos, he also shares Mie's appreciation of a fine cigar. 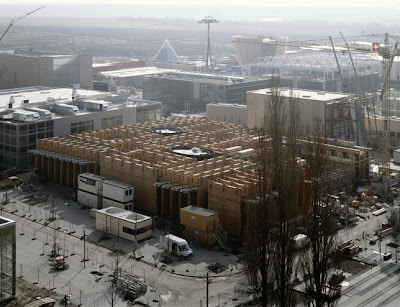 When the Art Institute's Joe Rosa unveiled two designs, by Zaha Hadid and UNStudio's Ben van Berkel, for temporary pavilions to open in June in Millennium Park to honor Daniel Burnham's 1909 Plan of Chicago, he spoke of having them come in to ""misread our city but re-interpret and reactivate it." I'm glad to have them here, but after thinking of Zumthor and his work, Rosa's strategy seems more and more like an intellectual's parlor game, less the "You must change your life" of Rilke's "Archaic Torso of Apollo," than changing the style of one's shoes.

Don't get me wrong. I'm excited having stuff by Hadid and van Berkel in Chicago, however temporary. Unlike Zumthor, I love surface and sensation, and I have little patience. And, really, what are the odds we'll ever get Zumthor, known for turning down many more projects than he accepts, to build in Chicago, a city known for its often rude, anarchic commercial enthusiasms? Who among the usual suspects would come forward as a patron for his kind of work? What kind of building would it be? What kind of presence would it bring?

And yet, it would be wonderful, yes? Not a glib "misreading", but an amazing counterpoint to our evasion of the spiritual. An expression, not of the "make no little plans" hubris that's become the mother's milk of every hack politician's dreams of grandeur, but of Burnham's all-but-forgotten vision of a deeper, more ethical and profound sense of urban life.

Somehow, I'm thinking just contemplating those questions may prove, over the long run, more compelling and rewarding than anything that comes and goes in Millennium Park this summer.

Zumthor will be presented the Pritzker Prize, which includes a $100,000 honorarium and a bronze medal, on May 29th in Buenos Aires. You can download a pdf with all information on the award from the handsomely redesigned Pritzker Prize website here.