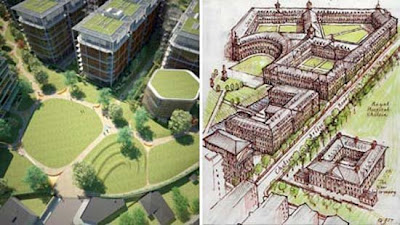 Being human, we enjoy being amused as much - probably more - than we do being enlightened. No matter how great the critic, they are more likely to be remembered less for their reasoned judgements than for moments of expertly written invective, and, as anyone unfortunate enough to actually read my stuff knows, nothing beats a grievous outrage of design or corruption to get the creative juices flowing.

Rarely, however, have I encountered anything as entertainingly nasty - and spot-on - as the normally sedate London Times architecture critic Hugh Pearman's unbound riff - in the alternate personality of guest writer "Squidgy" - on the controversy of Prince Charles', aka "the twattish heir to the British throne" attempts to subvert the public planning process to replace Richard Rogers' design for the Chelsea Barracks site in West London with an antediluvian classicist monstrosity by his court architect, Quinlan Terry.

It's a tale filled with greed, hypocrisy, conspiracy and complicity (Rogers' design is "Not. Very. Good. In fact, it is Shockingly Bad . . . a dog's breakfast worthy of Kanine Krunchies), with room for some well-aimed thwacks! at competing critics, as well.

In the tradition of Alice ("If you don't have anything good to say, come sit by me") Roosevelt, we give you Woke up on a Chelsea morning.

I would actually much rather see the Terry plan built.