Gregory H. Jenkins, AIA, has practiced architecture in the Chicago area for a quarter century. More recently, however, he's developed a sideline that's resulted in two remarkable web sites, and a great new book, on the Chicago architecture and sculpture you've probably glanced at countless times, but never have really seen.

Chicago Architecture in The Loop combines commentary, information, and Jenkins' striking photographs. Most recently, he's had an extended series on the Daniel Burnham/Peirce 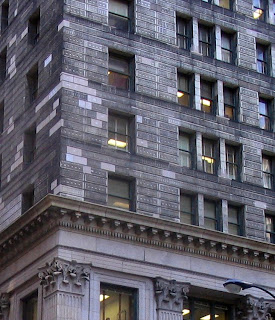 Anderson 1905 Edison Building. Formerly known as the Commonwealth Edison Building, it's one of two derelict buildings (the other the 1927 Bankers Building) around the Mies van der Rohe Federal Plaza. The Chicago Board of Education, the Edison's current occupant, has treated its facades with malign neglect, slumming them up with cheap, incongruous replacements for terra cotta panels that seem less an expression of the CBOE's thrift than to its indifference to doing anything right. (This photo not by Jenkins) Jenkins's photos let you see the underlying grandeur of the building.

What he's especially good at is the details, all those ornamental expressions 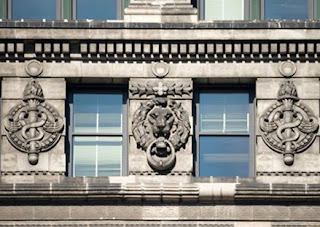 that we've probably overlooked even in a building we walk by several times a day. You may have noticed that Burnham and Anderson loved lions on their buildings, but did ever notice the variations? Jenkins has, and he gives you photos of all of them: lions with rings in an open mouth, lions with rings in clenched jaws, abstracted lions with no rings at all.

Chicago Sculpture in the Loop is Jenkins' 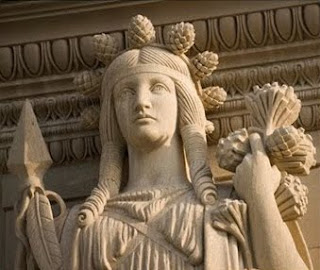 second website, and it may be even more interesting. You'll find out who was behind all the those sculptures that have become visual icons of their respective buildings, and see them close up. You'll discover the importance of sculptor Henry Hering, a student of Augustus Saint-Gaudens, who first gained fame at age 17 for his work on the Fine Arts Building of 1893 World's 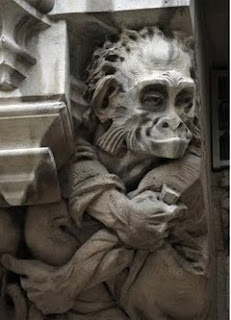 Columbian Exposition (now the Museum of Science and Industry). His work is everywhere in Chicago, including the four allegorical figures overlooking the Great Hall of the Field Museum. Ever wonder about those two statues atop the soaring columns at Union Station? One is Allegorical Night (complete with owl), the other is Day, and they're by Henry Hering, as are the figures on the Michigan Avenue Bridge.

How many times have you walked by Tribune Tower? Have you noticed the remarkable gargoyles designed by Rene Paul Chambellen? Jenkins has, and you can see them on his site.

Now Jenkins has assembled 177 of his best photographs in a new book, Chicago Figural Sculpture: A Chronological Portrait 1871-1923, which 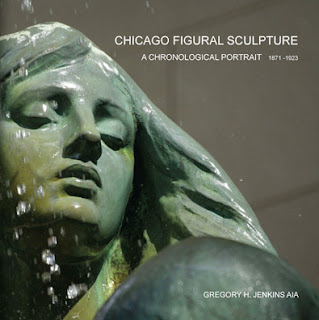 "documents extant figural sculpture in the heart of Chicago." Did you know there's a casting of Jean Antoine Houdon's George Washington on the fifth floor of City Hall? It's there in Jenkins' book, along with Johannes Gelert's Herald, which originally graced Burnham & Root's 1891 Chicago 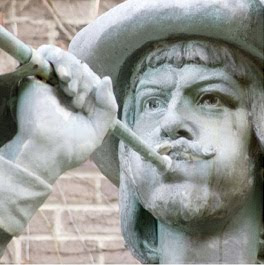 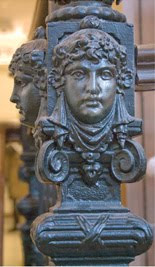 can see where all of the Richard Bock busts of German writers that once graced the facade of Adler & Sullivan's Schiller Theater have wound up, as well as such overlooked wonders as this ornament from Charles Atwood's Marshall Field store.

You can preview the first chapter of the book here. You can buy it on-line here or here. As usual, I'm telling you this too late to make it a great Christmas gift, but maybe you can just give a gift card with a printout of the cover photo. It looks to be one of the best Chicago architecture books of the year.

Chicago, Illinois is known for its architecture and has long been connected with some of architecture's most important names: Frank Lloyd Wright, Louis Sullivan, Mies van der Rohe, and Holabird & Root as well.