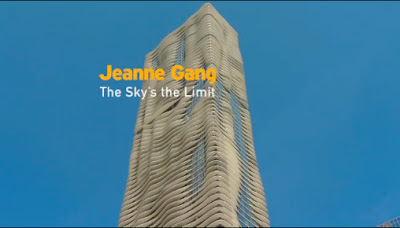 If look at the WTTW schedule for tonight, you wouldn't even know that it's there, but somewhere after the conclusion of tonight's 9:00 p.m. showing of American Masters, Bill T. Jones A Good Man  (the current estimate is around 10:30 p.m.) they'll be screening Jeanne Gang: The Sky's the Limit - a new documentary produced by Dan Andries, shot and edited by Tim Boyd.

It may be short - under 14 minutes - but it's far from filler.  For talking heads, there's Blair Kamin, Stanley Tigerman describing the rise of the Chicago skyscraper from the Great Fire to Mies to Gang, Redmoon Theater's Jim Lasko, and - apologies in advance - me.  Most importantly, there's lots of Jeanne Gang, herself, discussing her work and thought, and seen in action at Studio/Gang's Bucktown offices.  Boyd's photography is sharp and expressive, and the production covers a lot of ground without feeling rushed. 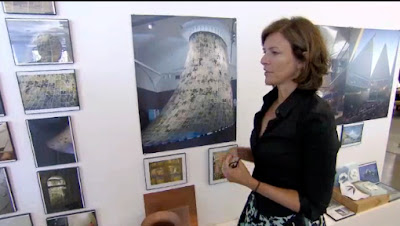 If you're not one for sleeping, the combo of documentaries is scheduled to be repeated on WTTW at 12:00 a.m., Monday Morning, November 14th.  Or you could just watch Jeanne Gang: The Sky's the Limit on-line here.

"He was still was wanting us to repeat Aqua, right?"  "He was wanting something Aqua-esque, yes."