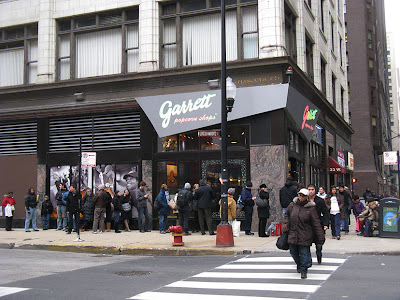 click image for larger view
You laugh.  Okay, so answer me this:  Did you know there are as many Garrett Popcorn shops in Singapore as there are in Chicago?  Or that there are two outlets in KL, where the Petronas Towers overtook the Sears Tower as world's tallest building?  And that now there's two outlets in Dubai, where, in turn, the Burj Khalifa supplanted Petronas as world's tallest?  Do you see a pattern emerging?

Did you know there's major trafficking of Garrett popcorn from Dubai into Kuwait?  Can another outlet territory - and a new tall building champion - be far behind?  Did you know the word "Garrett" has been banned from the Internet in the People's Republic of China, with all searches redirected to the web site of Xiào's House of Tasty Kernels, West Nanjing Road?

It's just popcorn, you say.  Yeah, right.  That's why at every Garrett Popcorn Shop, including its newest outlet on West Jackson in Chicago, pictured above, the smell of CaramelCrisp® lures shoppers, lawyers, judges, FBI moles and unindicted co-conspirators into a common thread of humanity that, no matter the weather, queues down the street to infinity, much like the line of appliance installers in the Monty Python new gas cooker sketch.

You forgot about our Shop in Hong Kong. Muwahahaha

The smell is disgusting. We were bombarded with burned popcorn stench in our office around the corner from the Jackson State location routinely and subjected to 300 pound hillbillys waiting in line on the sidewalk. Thank God we moved from there.

Lover of humanity - or recovering addict?