The Rookery: How to Get Lit without Getting Drunk With It 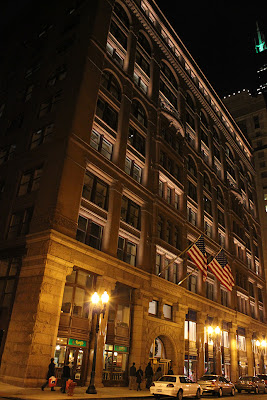 Click images for larger view. (And, yes, I need to buy a wider angle lens)
While we could always use a few more - I'm thinking especially thinking of 333 North Michigan, a gateway sentinel to the Loop (how about it, Rocky Wirtz?) - Chicago has no shortage of lit-up landmarks, with the blazing Wrigley Building the clarion princess of them all.  Floodlighting is the usual method of choice, but with increasing awareness of energy use, more subtle methods are now also coming in play.

Exhibit one might be Burnham and Root's 1888 Rookery Building at 209 South LaSalle, one of the glories of Chicago architecture.  On November 30th, a new exterior lighting system was switched on, designed by Jean Sundin and Enrique Peiniger of New York-based Office for Visual Interaction.

You can see the designers talk about the project for the John-Buck managed building in the promotional video below.  Sundin calls it "beautifully illuminated with very low energy",  a claimed total of 2304 watts.  (In contrast, the Wrigley building uses well over a hundred 1,000 metal halide lamps to get its knock-you-out-glow.)

The fixtures, from Austrian company Zumtobel, were hand crafted specifically for the Rookery.  "Nothing touches the building," says Sundin.  The brackets extend from the sills and rest on structure rather than attaching to it.  "The light fixture [is] not even two inches high and it's a little bigger than an index card.  This made the microsize fixture really vanish invisibly into the architectural detailing"

The red terra cotta that makes the Rookery so distinctive in daylight tended to make the building become something of a looming glob at night, punctuated by light coming from rectangular and often arched windows of isolated offices burning the post-5 p.m. oil.  There's something to be said for the organic and dynamic qualities of such improvisational lighting, but OVI's new lighting plan is subtle enough to preserve that kind of variance while still giving the Rookery a gentle visual pulse in the urban nightscape. 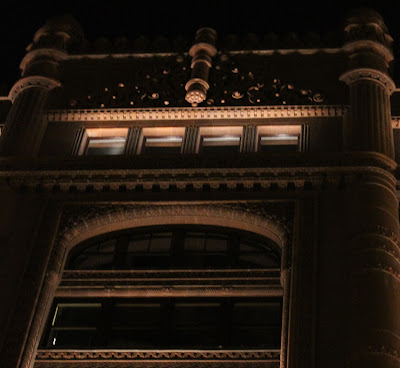 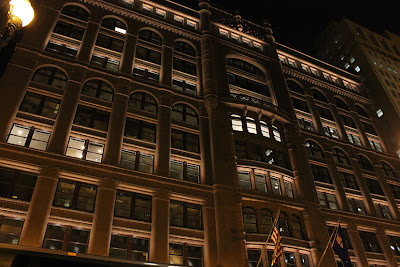 Your description of the Rookery is right on. Very well written post that captures every aspect of this great building.