Director Robert Carsen is known for his often controversial interpretations of classic operas, and his new production of Mozart's Don Giovanni which opened at LaScala Milan this past Wednesday would appear to be no exception, but - especially if you were in the audience and didn't know it was coming - the opening scene, played to the beginning of the overture, has to be one of the most spectacular conceits ever executed. 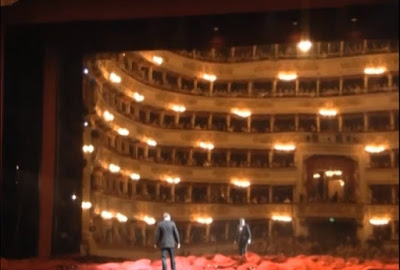 The danger with well-known works is that familiarity shears away the audacious qualities that put them at the forefront of creativity.  Carsen's shock treatment of beginning - not raising, but pulling down the curtain, revealing not a set, or even a bare stage, but the audience looking at themselves in an unstable mirror that seems to have placed them at the bottom of a fish bowl - is the shock that pulls the rug out from under business as usual and invites the audience to see one of the greatest creations of Western culture as if for the first time.  Critical reaction seems to have been mixed, and if you watch the entire trailer above some scenes look great, while others, such as the Commendatore running through Don Giovanni with a comically bendy sword, seem to have missed boarding the A-train.

The all-star cast includes Petter Mattei, Bryn Terfel, Anna Netrebko, Giuseppe Filanoti and Barbara Frittoli.  If you have the time and the money (up to $500 bucks or more a ticket), the LaScala production plays through December 28th, and returns in January with a substantially less starry cast.

If you can read Italian and make your way through a post of consists almostly entirely of scanned newspaper pages, check out the indispensable Opera Chic's coverage of the premiere, which was attended by both Italian President Giorgio Napolitano and new Prime Minister Mario Monti, as well as broadcast live across the nation on Italian television.  And if you don't mind bleeding chunks that look like they were taken from someone's cell phone, you can check out these excerpts on YouTube.

If you want to see the entire production, apparently in Chicago proper you're out of luck, but you can catch the opera on December 13th at the Marcus Theaters in Orland Park, and on December 18th and 22nd at the Wilmette Theatre in, you know, Wilmette.