click images for larger view
We may be heading into summer, but that hasn't stopped two exhibitions from making their way into the city this week, both with official Friday, June 22nd openings. 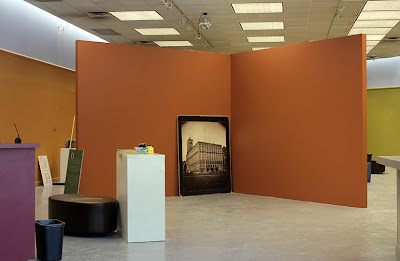 Over at the Expo 72 Gallery at 72 E. Randolph, Chicago's Cultural Historian Tim Samuelson is curating Wright's Roots, which explores the formative years of architect Frank Lloyd Wright.  When we think of Frank Lloyd Wright, we think of the larger-than-life persona he created for himself as the self-proclaimed "greatest architect on earth".  Wright's Roots looks beneath the veneer . . .


Every icon has their start somewhere. Frank Lloyd Wright’s reputation as a brilliant architect and outsized personality came from complex roots – many going back to his early years in Chicago.

Since his death in 1959, the story of Frank Lloyd Wright’s life and career has become legendary – and sometimes drifted into myth. Many of today’s perspectives came from Wright’s own accounts of a professional career that spanned three quarters of a century. His path to becoming a colorful public figure synonymous with modern architecture was filled with many little-known detours and diversions, but all contributed to his lasting fame and reputation.

Using seldom-seen illustrations and original artifacts to tell the story of his complex personal journey during the often-overlooked early period of his life and career, Wright’s Roots explores Wright’s formative years.

That rendering at the top of this post?  Not a Charles Atwood special, but a youthful indiscretion by a young FLW, the man said to have selected the names of composers included on the Auditorium's proscenium. 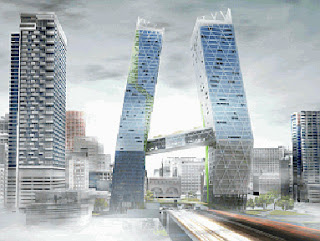 While the official opening is Friday, I'm hearing you may want to stop by next week to see the show in its full glory.  Wright's Roots runs through September 30th.

Meanwhile, over at the Chicago Architecture Foundation, 224 South Michigan,  there's another opening on Friday the 22nd.  The Unseen City: Designs for A Future Chicago, four Chicago academic institutions presents their visions of the future for city life.  Participating are Archeworks, UIC and IIT, in partnership with the Council on Tall Buildings and Urban Habitat and Adrian Smith + Gordin Gill Architects, rethinking such locations as Cermak Road and Garfield Boulevard.

We've just added a new event for June.  On Monday, June 25th, in the Lower Core of Crown Hall at IIT, Rajnish Wattas will lecture on Chandigarh's Identity Crises: Garden City to Urban Juggernaut?  On Thursday June 28th, there'll be an all-day symposium Trees as a Legacy in Design and Development, at the Chicago Botanic Garden.  There are still over a dozen great items to come on the June 2012 Calendar of Chicago Architectural Events.