William Le Baron Jenney's Home Insurance Building, often referred to as the world's first true skyscraper, has been gone since it was torn down in 1931 for the Field Building. 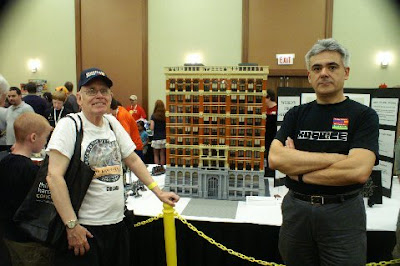 Last weekend, however, it lived on in this Lego replica, created by Gordan Grguric,  Ph.D, who can seen to the right in this photo with our indefatigable correspondent Bob Johnson, who sent us these pictures from his visit to this year's Brickworld event held last weekend at the Westin Chicago North Shore in Wheeling, a gathering were Adult Fans of LEGO (AFOLs) come together to run amok creating structures with the popular toy. 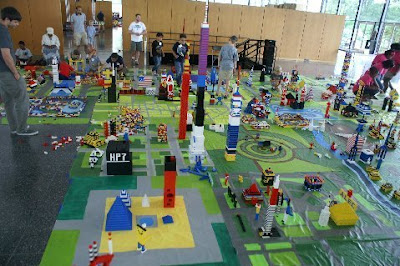 This is in way of reminder that another Legomaniac event is coming up.  On July 21st, from 10:00 a.m. to 4:00 p.m. in Crown Hall on the IIT campus, the Mies van der Rohe Society will again be sponsoring Build Your Own Lego City.  Last year's event is depicted in the photo above.


Build a masterpiece within a masterpiece. Pint-sized architects and their helpers are invited to build a city of LEGO creations within Mies' masterpiece, S. R. Crown Hall. We'll provide the bricks, and the rest is up to you.

And, from 2007, check out what a bunch of Asian Architectures did with Legos in my article, Toy Futures: Building Asia Brick by Brick.

Is this really true or are they actually a financial benefit all. Thanks for your valuable information.

Thanks a lot for the informative article. I am really interested to read more from you. Auto Insurance with International Driver License

Thanks for sharing this fabulous post. Awesome! Fast Insurance Quote

So luck to come across your excellent blog. Your blog brings me a great deal of fun.. Good luck with the site.
prudential takaful

Thank you for sharing such great information. It has help me in finding out more detail about home insurance!