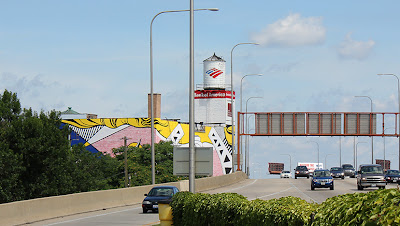 click images for larger view (recommended)
It's really meant to be seen above-ground as your car barrels down the Kennedy Expressway, a view  you can actually experience at about the 2:45 mark in the video found here.

The mural wraps around three sides of the loft building at 1735 North Ashland- -just south of the rail line that is becoming The Bloomingdale Trail - that had been home to the American Sample and Printing Company in the 1920's, and the Chicago Apparatus Company in the 1960's.  In the 1990's, the late Chicago menswear retailer Bigsby & Kruthers used the building as a warehouse, and began the practice of advertising via huge 8,600 square-foot murals facing the Kennedy, featuring Chicago sports figures such as Sammy Sosa, Michael Jordan and, most infamously, Dennis Rodman, whose mural featured a change of hair color every few days and resulted in gawking motorists ramping up travel times by up to 40 minutes.  It's identify as an architectural billboard eventually subsumed the structure's identity - it's now officially know as The Mural Building. 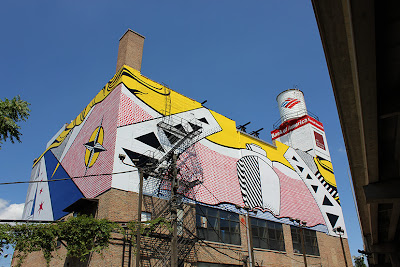 After LaSalle Bank assumed Bigsby's lease, it continued the program with its own murals.  LaSalle Bank was later absorbed and rebranded as the Chicago branch of the Bank of America, one of the key underwriters of the spectacular Roy Lichtenstein: A Retrospective, exhibition, running at the Art Institute through September 3rd, which has already blanketed the city with a promotion campaign including banners, stickers double-decker buses and election-day palm cards. 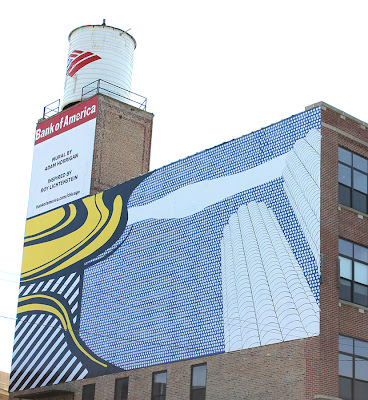 Working with the School of the Art Institute, a competition was held among students "to design a mural in the Pop Art style highlighting Chicago’s scenes and unique heritage."  The $7,500 first prize was won by Adam Horrigan, "a native of Grand Island, N.Y., who is pursuing a post-baccalaureate certificate in visual communication design."

The mural begins with the Trump Tower and ends with Marina City.  In between is the Chicago River and a ship moving under an opened bascule (not drawbridge, Conan) bridge, the Chicago flag and what looks to be a deep dish pizza.  The back fire escape actually looks like a three-dimensional expression of the structure of the bridge's under-carriage. 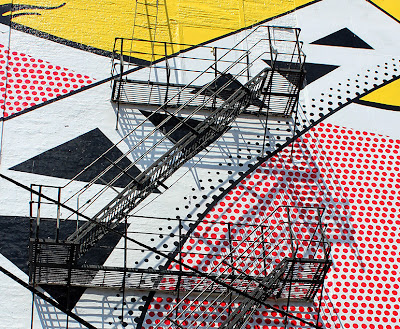 An estimated 400,000 people pass by the mural every weekday. 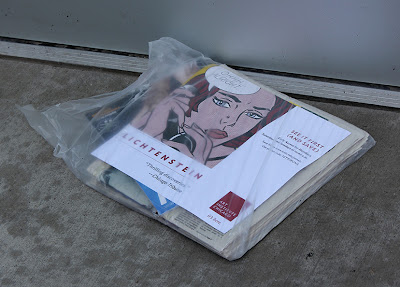