Even as Curbed Chicago is showing the scaffolding going up around the concrete cloverleafs of Bertrand Goldberg's Prentice Hospital,  a 500-car urban cockroach of a parking garage at Randolph and Wells is getting a reprieve. 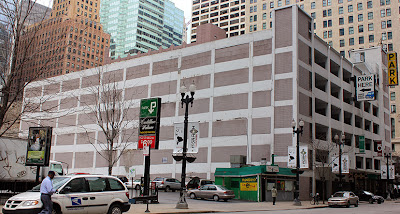 We had written back in May about the new 23-story tower by Lothan Van Hook DeStefano Architecture that was set to replace the raw-boned garage.
Last week, however, Ryan Ori of Crain's Chicago Business reported that the garage was sold out from under the tower's developer, J. Paul Beitler.  Competing developer John Buck has purchased air rights above the garage to stop any construction from blocking the views from Buck's proposed new 36-story 151 North Franklin, just next door.  151 North Franklin tenants and the apartment dwellers of Randolph Tower, just across the L tracks, will now be able to amuse themselves observing each other's behavior patterns without obstruction.  According to Crain's, Buck still needs city approval and an anchor tenant to get his 825,000 square-foot project off the drawing board, but that hasn't stopped him from creating a 151 North Franklin website which includes this video walkthrough . . .

151 North Franklin from REA on Vimeo.

The design, which would be the first skyscraper by John Ronan Architects,  includes this deep dish lobby space . . .
The tower will replace a nondescript Walgreen's on the corner of Randolph and Franklin that was previously home to the legendary “Max the Hat's” Zimmerman's Liquors, in it's time proclaimed to be the largest wine and spirits store in the world. 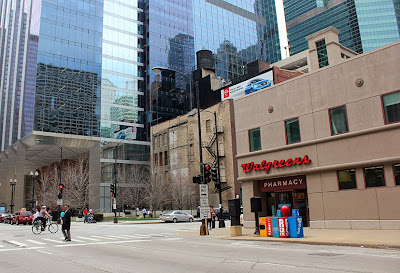 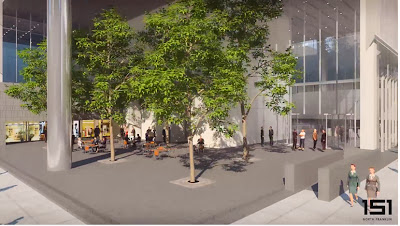 151 will share the park across the street separating it from Buck's 155 North Wacker tower to the west.  The project will be presented to the community at a public meeting next Monday.

According to Crain's, Beitler is scouting another location for his tower.  The garage's new owner, InterPark Holdings - which “parks over 20 million cars annually” - is expected to undertake some renovations at the nearly high-century old garage.  Let's hope its intrinsic charm survives. 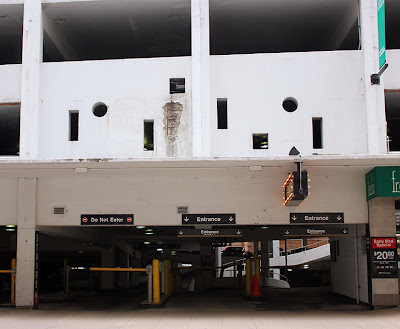 I somehow doubt that Buck's nervy and self-focused tactic is unprecedented in Chicago. In the Pantheon of jaw-dropping real estate dealings in the city, it's probably, in fact, nearly the paradigm of virtue and civic-mindedness. But it's still just wrong.