Except for the required shadow analysis, how often do architects study the effect of light on their buildings.  You could argue, “What's the point?”  The sun comes, the sun goes, hour to hour, day to day, season to season.  There's not much you can do about it.  It is what it is.

Still, sunlight makes dramatic differences not only in how we see buildings and, quite possibly, but how they affect our psychological balance.  This is the landmark former Home Bank and Trust at Polish Triangle on a overcast day. 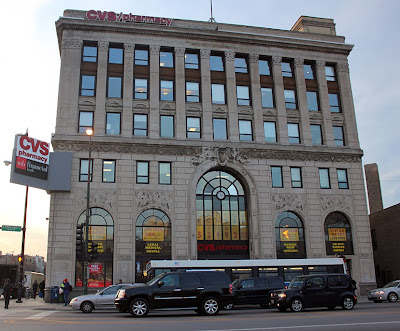 And this is how it looked a couple weeks ago in full sunlight.  The heavy stone takes on a mimicking lightness, becoming almost luminous. 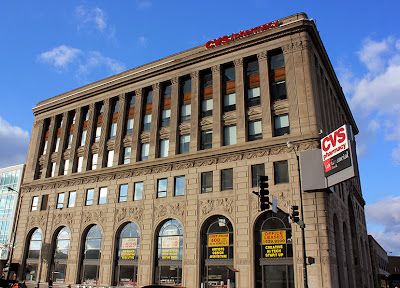 The day I stopped by, it was well into afternoon, and so the shot you see at the top of this post of Wheeler Kearns Architects ' 1611 West Division, which began welcoming tenants last month, was on the shadow side of the sun, tending to flatten the contours of its jagged facades, just as it does with classically-styled bank building under similar conditions.

Walking back to the western side of the building, the impression was quite different . . . 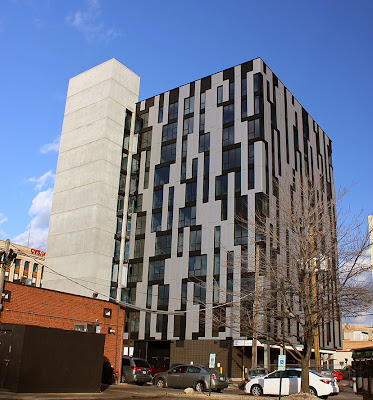 The building goes full-up 3-D.  The metallic metal jigsaw pieces pop, stressing a verticality held together by the black spandrels.  The windows become cool blue streams of reflected sky.  The tall concrete service core at the corner becomes the anchor that holds all the lightness in place.  What appears in shade as a monolithic metal box with perforations, becomes, in sunlight, an articulated facade of discrete elements in lively conterpoint.

Clearly, Wheeler Kearns was looking for a new way for designing an anchor building at a major intersection, something between the heavy stone massing of traditional design, and the generic  sameness of the modernist glass box . . . 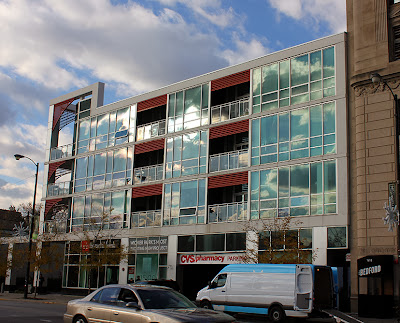 A page on the projects website discussing the architecture refers to “an expressed circulation core pulls away to clearly read as a separate public entry to a mix use of offices, exercise and bicycle storage above."


Holding the Corner, Framing a Gateway.
Responding to the pivotal location on the park and the communities expressed desire for a major building/gateway to and from Division Street, 99? apartments are built above, with easy access to public transport and the city. The perfect opportunity to use Transit Oriented Design strategies.

Folded Facades Give Back.
The two street facades are pushed back, creating an enigmatic profile from the street, the facets catching light in subtle ways, emphasizing verticality. The sidewalk experience benefits from these widened pedestrian ways, around the bus shelter and puts the retail more in view.

A Woven Façade. Thought of as a mass wrapped by fabric, the façade is created by luminous, vertical metal panels and deeply recessed windows, more open where living occurs, more closed where sleeping does. Implicitly acknowledging the varying characters within, each façade varies in composition as it rises, making each apartment a unique experience.'

In direct response to the neighborhood and city, the project eliminates parking for residents, creating a development marketed entirely towards mass transit goers, bicyclists and pedestrians. It also addresses the larger environmental goal of providing higher density housing and services without adding un-desired traffic. The project is a rare example of cooperation and collaboration between community, municipality, developer and architect that embodies the vision and mission of Wheeler Kearns Architects.

As discussed by Chris Bentley in his report for the  Architects Newspaper's Chris Bentley, the community's campaign for something more ambitious than the usual Walgreen's with surface parking dates back to 2007. 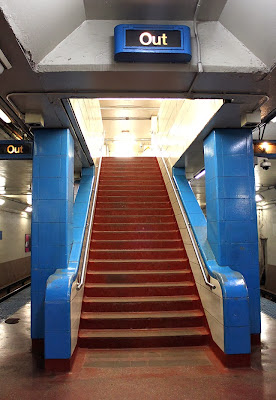 Served by three major bus lines and the Division stop on the CTA Blue Line, 1611 actually walks the TOD talk.  Although the building includes retail on the first floor, offices and studio space on the second, and 99 apartments on the top eight floors, the only parking is nine spaces for the retailers, first-come/first-served, at the adjacent Wendy's parking lot. 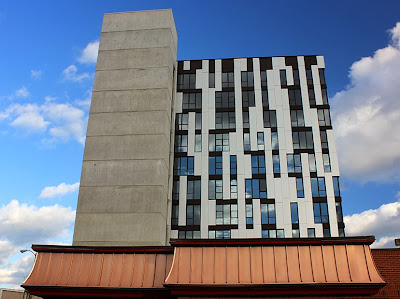 Known as the Tower of Pizza Hut after the site's previous tenant, 1611's design has inspired spirited discussion, which is welcome.  The great banks and department stores that anchored our neighborhoods for most of the 20th century are long gone; the proud buildings they constructed survive as historical artifacts often starving for viable re-use.  We need new ways for larger-scale structures to visually anchor the “town squares” that channel the character of the city's neighborhoods.  Wheeler-Kearns 1611 is a bold calling card in that debate. 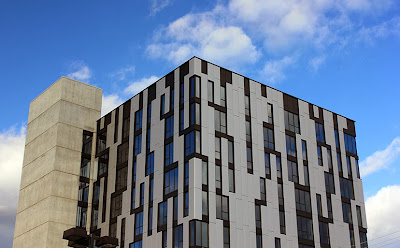 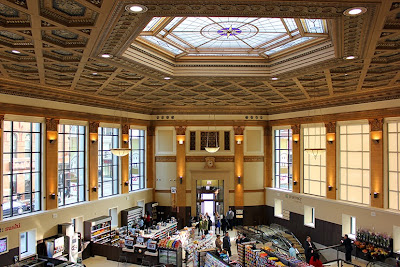 From Drugs to Dollars to Deli: the story of Walgreens and the Landmark Noel State Bank

The service core as visual anchor is a well-articulated assessment--I hadn't thought of it that way, but now I know why I like its place in the composition so much (the way it parallels Inland Steel in functional candidness and expression is nice too). I'll be bummed when/if they commission art/advertising for the west elevation of that core, but for now, we get to bask in the rawness.

Facades reminds me a lot of Libeskind's Ascent in Covington, KY. Form should've been more interesting to match.

Thanks for the insightful critique!
The community was clear in its desire for a dense, pedestrian-oriented, mixed-use development and unified in its willingness to wait as long as necessary for the right building. We were lucky to be represented by two successive aldermen willing to do the hard work to get it done, a developer with the vision to see our shared interests and an architecture firm with equal measures of talent and sensitivity.