It seems we've reached the time of the year when our only choices are frigid and clear or warm and gloomy.  Today, Saturday in Chicago, we've apparently gone for warm and gloomy.  So I'm thinking we could use a spot of not uncontroversial color to cut through the drab. 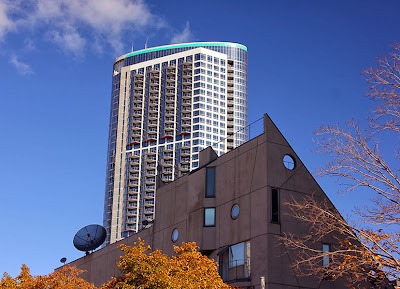 The 43-story Hubbard Place, across from the East Bank Club at 360 West Hubbard in Chicago's River North, is the latest residential tower from Solomon Cordwell Buenz, with Daniel Weinbach and Partner's generous landscaping complete with a new sculpture, Lotus, by Chicago sculptor Terrence Karpowicz.  (See the photos of the installation from the indomitable Jyoti Srivastava's Public Art blog, here.) 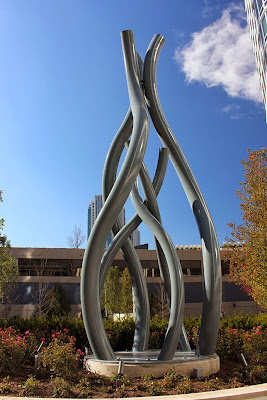 orange accents along the building's edges.  Orange was even a key color in the logo and promotional materials for the building.

Looking at the structure now, most of those accents seem not to have made the final cut, but still survive in the whimsical carrot planters that flank the entrance. 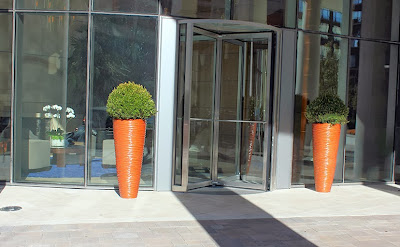 To the south, the garage structure next to the building is pure vanilla. 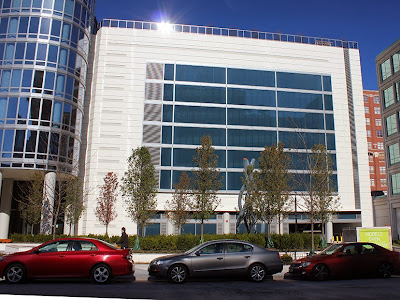 To the north, however, even as it's dominated by the huge window wall that captures the Sexton lofts across the street, you can start to see a slight seep of orange at the corner.

Round that corner to the east facade, and there's AN EXPLOSION! 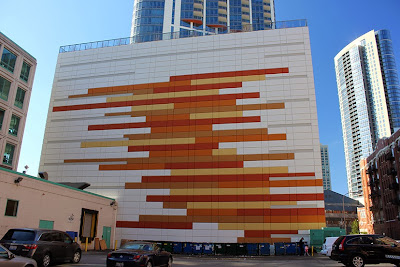 I'm not quite sure what to make of this.  It kind of screams 1960's supermarket.  Or a bar chart of a mental breakdown.  It's like when you were a kid and you had a Lego set, and you were trying to build a white building but you ran out of bricks, so you had to make do with leftover colors that usually stayed in the box.  And if you think I'm being mean, check out what some of the Sexton residents had to say.

A city's character is  made of many things.  Some good.  Some bad.  Some so inscrutably bad they become their own kind of landmark, a poke in the eye that won't be ignored.  The colorstrips of the Hubbard Place garage are that kind of landmark.  They bring a whole new outbreak of crazy-quilt stitchery to Chicago's urban fabric.

This is interesting - you usually have pretty sophisticated taste, so I'm curious what your objection is. I agree that the color choices may have been a little off, but the abstract composition is great and the result is so much nicer than a blank wall that will inevitably come to host a billboard.

I saw this wall for the first time this weekend and the surface parking lot that leaves the wall exposed. I have to say that I think you have it all wrong - I can't think of a spot in Chicago where they more successfully beautified a wall along a surface parking lot, and if there's an architectural change to be made here, it is to eliminate the ugly surface parking lot.

Inspiration from a kitchen tile "backsplash" from Studio 41. Lame.