In the current edition of Crain's Chicago Business, Alby Gallun is reporting that Kimpton Hotels intends to turn William LeBaron Jenney's landmark New York Life Building, at LaSalle and Monroe, into a 200+ room hotel.  Just to the east, 100 West Monroe is already in process of being turned into a Hyatt.
Kimpton is no stranger to landmark buildings, being the current manager of Hotel Burnham, a/k/a Burnham and Atwood's 1894 Reliance Building, as well as the Hotel Allegro, long known as Eitel's Bismarck.   Their other local properties include the Hotel Monaco and the new Hotel Palomar. 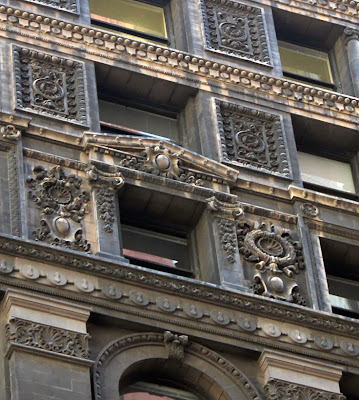 If the New York Life plan goes through, it means that the building will have evaded a poison pill that the ever compliant Commission on Chicago Landmarks pushed through as part of its 2006 designation.  It would have allowed much of the landmark to be gutted for a 51 story office building next door at 29 South LaSalle to be  constructed partially within its footprint.  This was amended in 2009 with a revised proposal that would have infringed on only about a third of the landmarked site.  Thankfully, neither of those plans came to pass, and the Kimpton proposal appears far less intrusive. 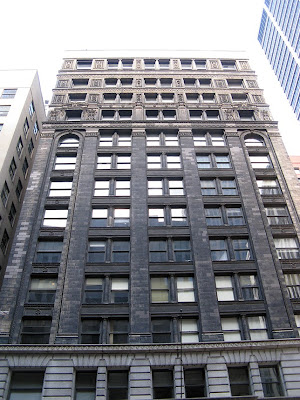 The Commission's reliably comprehensive and informative report on New York Life details why multiple additions made the top of the building seem to stutter, saying essentially the same thing three times.  Originally completed as a 12-story structure in 1894 at a cost of $800,000, just five years later a thirteen-floor addition was built just to the east, with the 13th floor extended over the original building to help tie them together.  Just another five years down the road, in 1903, a 14th floor was added, and there things have stood down to today, except for the original cornice bring replaced with the usual brutal blank brick wall long ago.
Beginning to affix the curtain to a building under construction long before it's even topped out is common practice today.  When Jenney did it at New York Life he was a pioneer in realizing how skeleton construction differed from buildings with bearing walls, mounting the terra cotta on the upper floors even as the lower remained open steel frame awaiting the arrival of granite facing.

New York Life's monumental lobby remains remarkably close to the original . . .
Note to Kimpton:  If you really want to make your hotel stand out among the competition, take the money to replicate those original electroliers (and call Gunny Harboe to restore the cornice.) 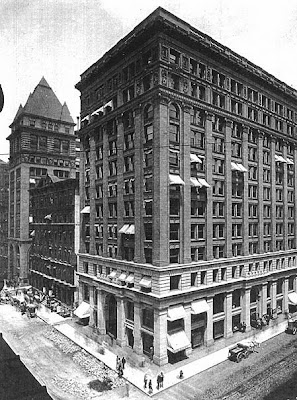 Snowed under in Edmonton said...

Please don't forget that the architects of the New York Life Building - and of the YMCA Association Building shown in the background, currently known as 19 South LaSalle - were Jenney and Mundie. Everyone seems to remember William LeBaron Jenney, but few seem to know of William Bryce Mundie who became a partner and heir apparent to Jenney in 1891. Mundie's contribution was to organize the practice so that it could accomplish skyscraper commissions - a modern model that revolutionized architectural practice at the time and is still practiced today. Many commissions of the Jenney & Mundie practice and its successor, Mundie and Jensen, still get credited solely to Jenney, despite buildings like the Union League Clubhouse (1926)being started long after jenney's death. The New York Life Building may contain one of the most stylish office building lobbies for its time.