I have to admit to being somewhat taken aback this past year by the total lack of discussion or interest in the Art Institute of Chicago shutting down one-third of its Renzo Piano-designed Modern Wing for six months of “adjustments” only four years after its opening. Nearly 100 masterworks were shipped to the Kimbell Art Museum in Ft. Worth for a blockbuster exhibition The Age of Picasso Matisse: Modern Masters from the Art Institute of Chicago.

Ironically, to make move for the exhibition, the Kimbell's permanent collection has been moved out from the original world-renowned building designed by Louis Kahn to a new addition designed by Renzo Piano.  According to architecture critic Martin Filler, writing in the current issue of the New York Review of Books . . .


The switch involves unfortunate comparisons.  With their celebrated skylit concrete ceiling vaults and use of creamy travertine on the walls, Kahn's interiors virtually caress pictures shown within them, in an almost uncanny melding of sensitively proportioned volume and mysteriously modulated light.  Not surprisingly, the Art Institute's best twentieth-century pictures here look better than they ever have at home.

Filler damns the Piano addition with faint praise.  The title, No Harm to the Kimbell, pretty much says it all.  Although Filler raves about Piano's finely crafted, 2 percent titanium walls as “the most ravishing concrete I have seen in the U.S.” he concludes “the new Kimbell addition will soon fade into the middle rank of Piano's oeuvre, neither at the top . .  . nor the bottom.”  He doesn't mention where the Modern Wing falls in his rankings.
Filler's review is not available online, except to subscribers.  If you don't have it already, pick up the January 9th issue of the NYRB.  With a haunting new poem by Wislawa Szymborska, Garry Willis's acute dissection of the mis-analyses of Joe Scarborough, and the usual assortment of great pieces on myriad topics, it's well worth the price.

When the Modern Wing opened, it met with a largely ecstatic critical response.  There's much to admire in Piano's design, but I can't help thinking of it as something of a great white whale, ever-so-tastefully smothering the sting of the often ragingly provocative art of the early 20th century.  The scrupulously neutral harbors its own aggressions. 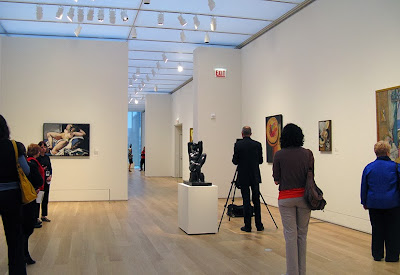 The Shock of the New: 1/3 of Modern Wing Shuts Down as Picasso and Matisse head out for six month Texas excursion.  Read here.