[Saturday December 21 update] Despite mixed reviews,  at 36 crores Dhoom3 broke the Indian boxoffice opening day record for.  It also set a new record for the North American opening of a Bollywood film, taking in over $1 million from 236 theaters, nearly doubling the per-screen average for Anchorman2 and Hobbit/Smaug.

It was late summer 2012 when Bollywood director Vijay Krishna Acharya's helicopter buzzed  my Marina City balcony as he was tearing through Chicago filming the 3rd installment of the blockbuster Dhoom franchise with Indian superstar Aamir Khan.  At a reported 100 crore, it's a big-budget production for India.  Converted to U.S. Dollars, however, that comes out to just slightly over $20 million, but I'm sure Michael Bay is wracking his brain as to how Dhoom 3  managed three months of Chicago location shooting for what his Transformers:Age of Extinction probably spent just on ear plugs.
Dhoom 3 feasted on Chicago's rich architecture for its backdrops, from Millennium Park to the roof and lobby of the County Building, to the Broadway Bank lobby and Union station arcade, to the requisite car and motorcyle chases on lower Wacker and leaping a raised bascule bridge, speedboats racing down the river,  a dance number choreographed around a Cesar-sized version of Rahm's raised middle finger, and flipping cars like McDonald's flips burgers at Dearborn and Randolph.  The trailer promises spectacular stunts,  a circus, magicians, a beautiful aerialist (as in Wings of Desire), Odd Job's - or maybe John McCabe's -   bowler, and an ecstatic musical finale on the great lawn of Frank Gehry's Pritzker Pavilion.
Today, Friday, December 20th, the world finally gets to see what it all adds up to, as Dhoom 3 debuts simultaneously on 4,000 screens in India and another 700 worldwide, including the AMC River East, where, if their website is to be believed, it will have no fewer than three midnight shows.

It's the first Indian film to be shone in IMAX.  It's nearly three hours long.  It's in Hindi.  I'm not sure there'll be subtitles, but Chicago needs no translation. 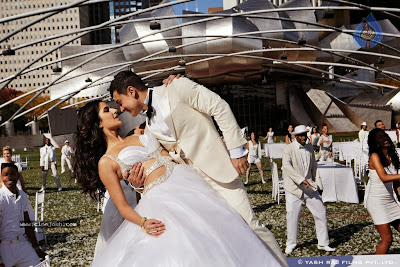 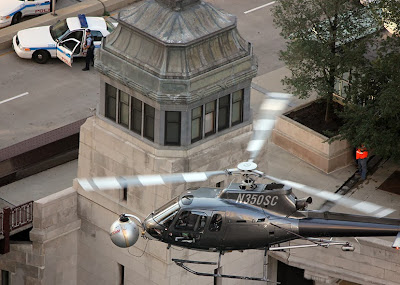