Two Tales of the City: Chicago - History to Rubble, Ice to Glass

One day, we will probably get around to writing a major post.  This is not that day.  Instead, a couple of updates . . .

158 years of Chicago History, Quick Reduction.
Above is a photograph of the 1855 John Russell house at the time we wrote it about it this past May.  Below is what it looked like last Saturday. 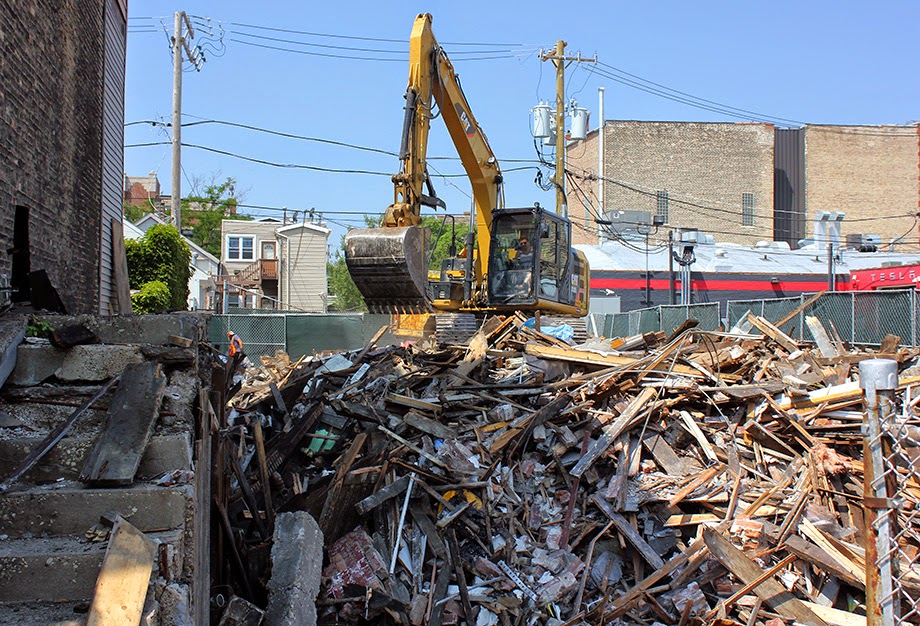 Eric Nordstrom of Urban Remains obtained the salvage rights to the property, and spent many hours exhaustively exploring and documenting the historic structure, even discovering the original western gable all but perfectly preserved in the attic after an addition extended the house.
Eric wrote more on his discoveries here, here and here, and he has a photo gallery on the house's erasure from Chicago's built fabric here.

For a very different trajectory than that of the Russell House, we give you 1K Fulton.  It began as this . . . . 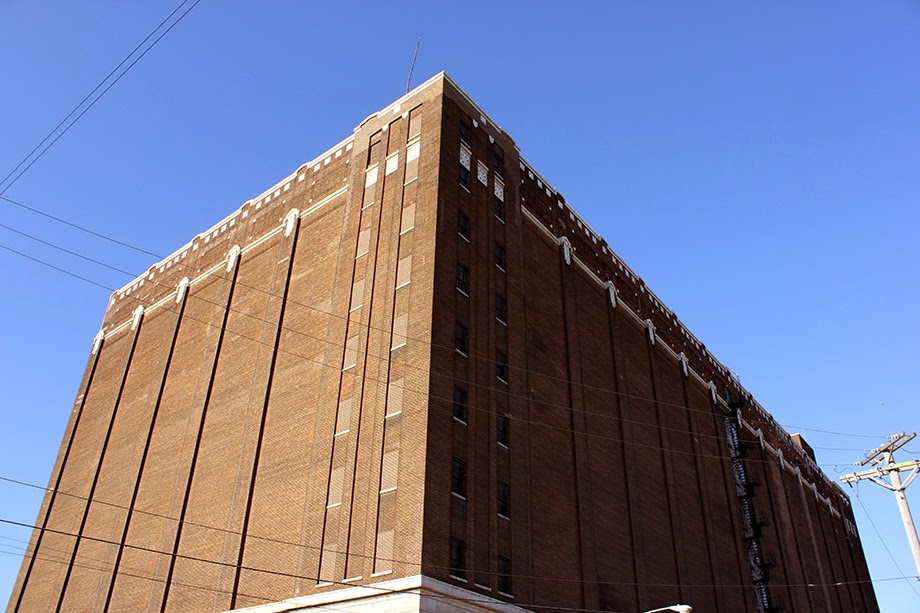 The massive Fulton Cold Storage building, which dominated the Fulton Market food processing district since its construction in 1920.  Things began to change, subtly at first, as Randolph Street west of the Loop began evolving as a strip of trendy restaurants, and residential, art galleries and boutiques began to infiltrate the rough, working-day environment of the Fulton Market District.  Then the dam broke when the owners of Fulton Cold Storage saw the writing on the wall, moved their operations to the suburbs and sold their massive building to Sterling Bay, the developer that is acquiring more and more property in the district.  In a bold stroke, Sterling Bay announced the rebirth of the building as 1K Fulton to design by architects Hartshorne Plunkard Architecture.
After defrosting decades of accumulated ice within the cold storage warehouse's interior, the original facades were demolished as the building was stripped to its concrete skeleton . . . 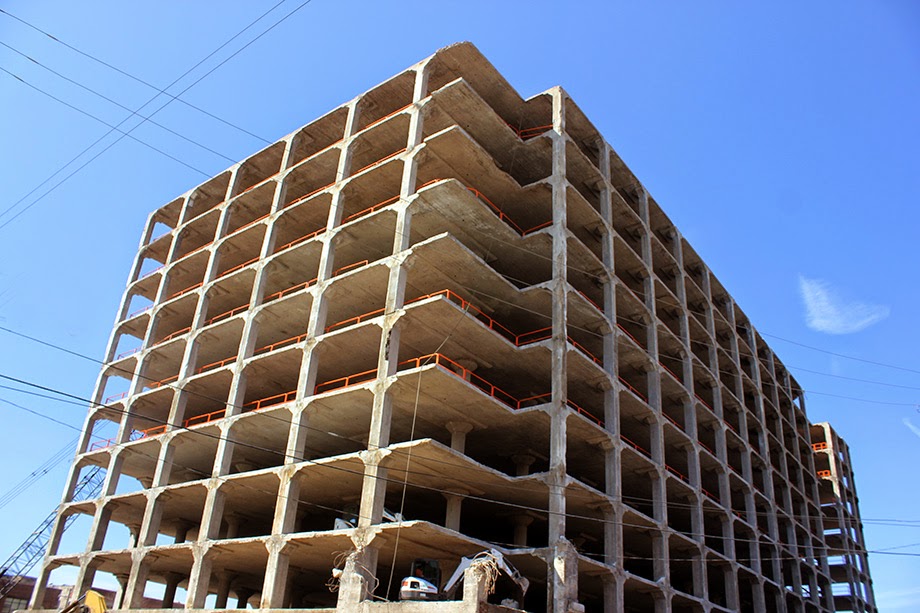 . . . and a completely new annex builing was constructed to the south.  Last Saturday, the new facade was almost completely on the original Fulton Cold Storage, looking not dissimilar to the old, except that the original brick was now half-brick fused into a precast-panels. 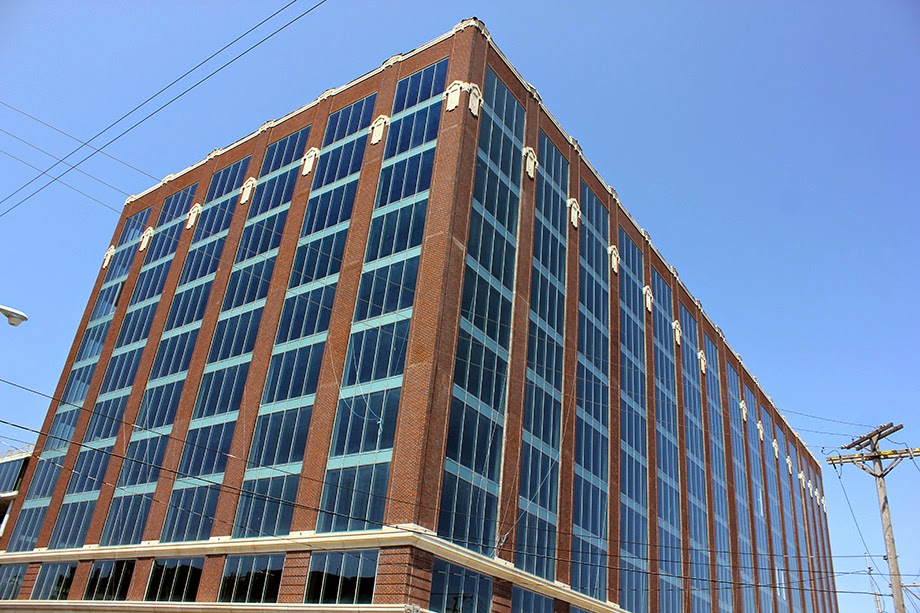 The old terra-cotta ornament was replicated in a special concrete mix molded into the new panels. 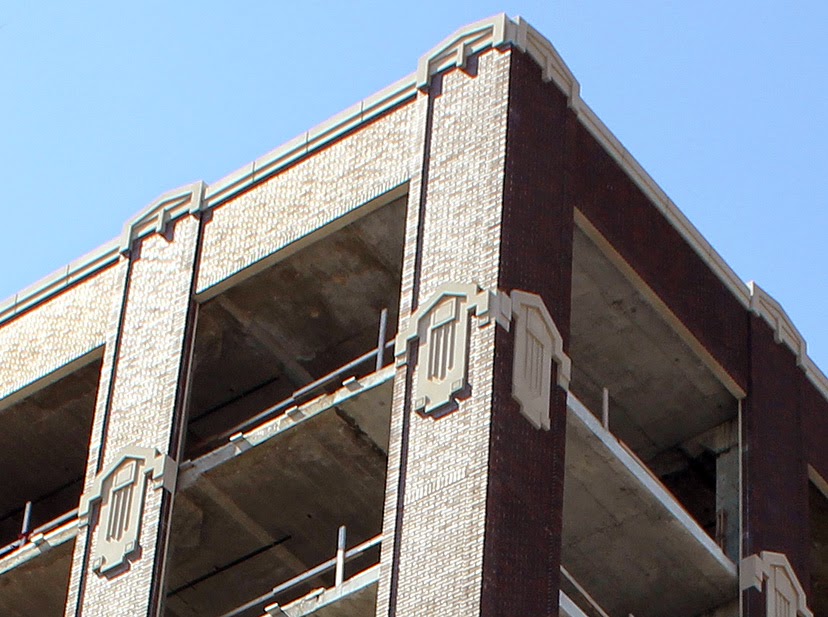 The south wall of the old building has no middle piers, but is instead a continuous glass curtain wall, giving a clear view into the interior and the columns of the original structure, and mirroring the glass walls of the new annex building just to the south.  (Inexplicably terminated on the ground floor with incongruous, Prairie-style brick piers.) 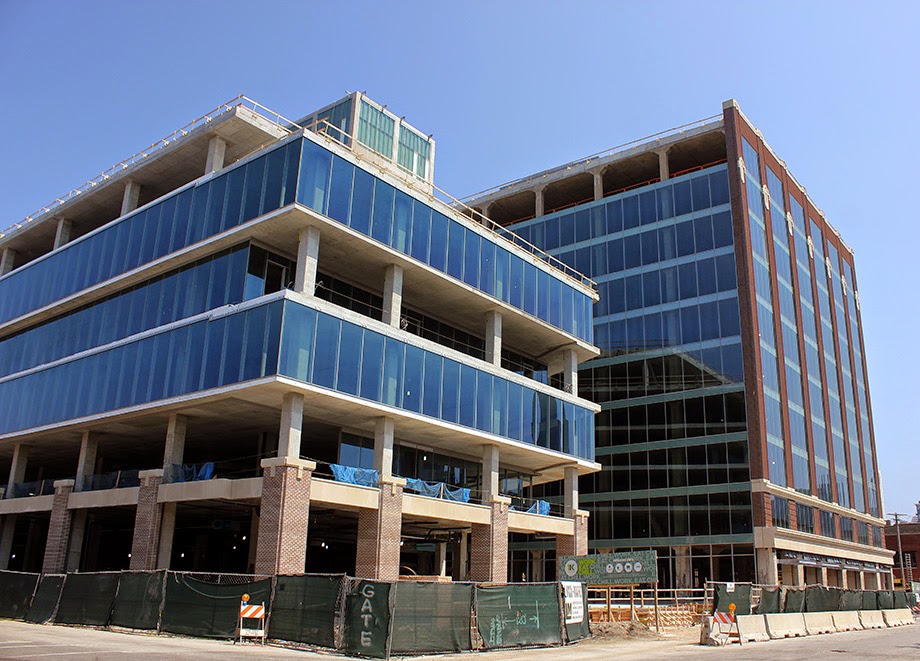 When over 500 Google employees will move to 1K Fulton next year, it will mark a tipping point of what is now a booming and rapidly changing Fulton Market District.  In June, the Commission on Chicago Landmarks passed a proposal to make many of the approximately 125 buildings in the area a protected historic district, a move that is being fought by the district's long-term landowners, who appear torn between seeking to continue their businesses amidst a district in which they are increasingly outliers, and wanting to make sure no landmark restrictions lower the price they will get if a developer wants to knock down their building for another high-rise.
In July, the Chicago Plan Commission approved the Fulton Market Innovation District plan, designed to provide guidelines for ongoing development that preserves the area's historic elements within the high-tech Boom Town that is also “the city's last remaining market district.” 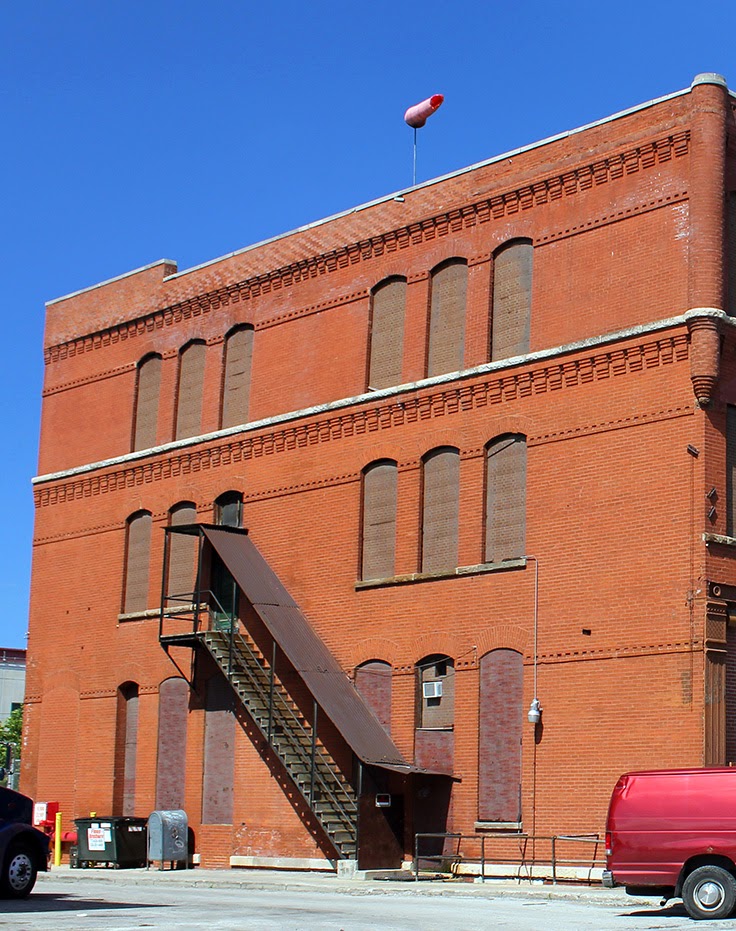 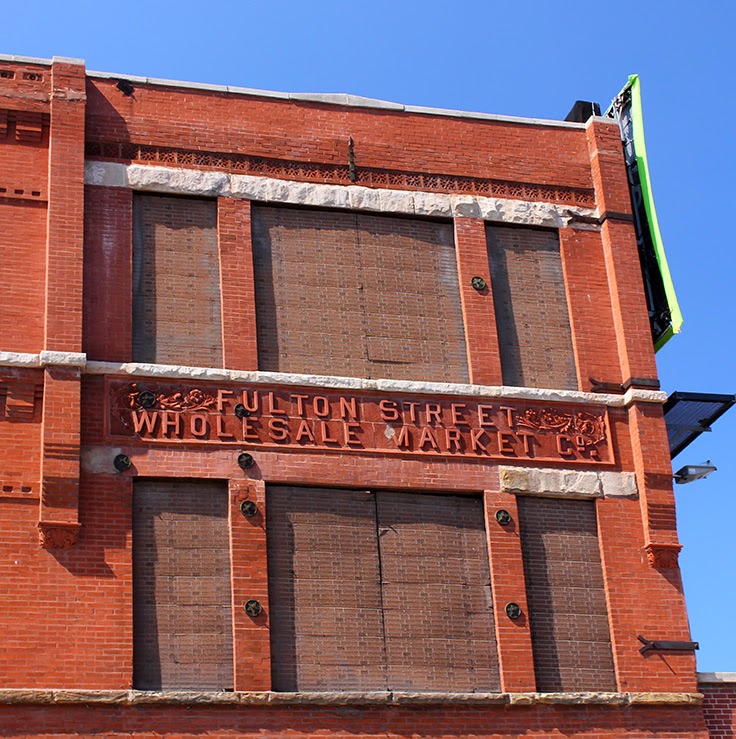 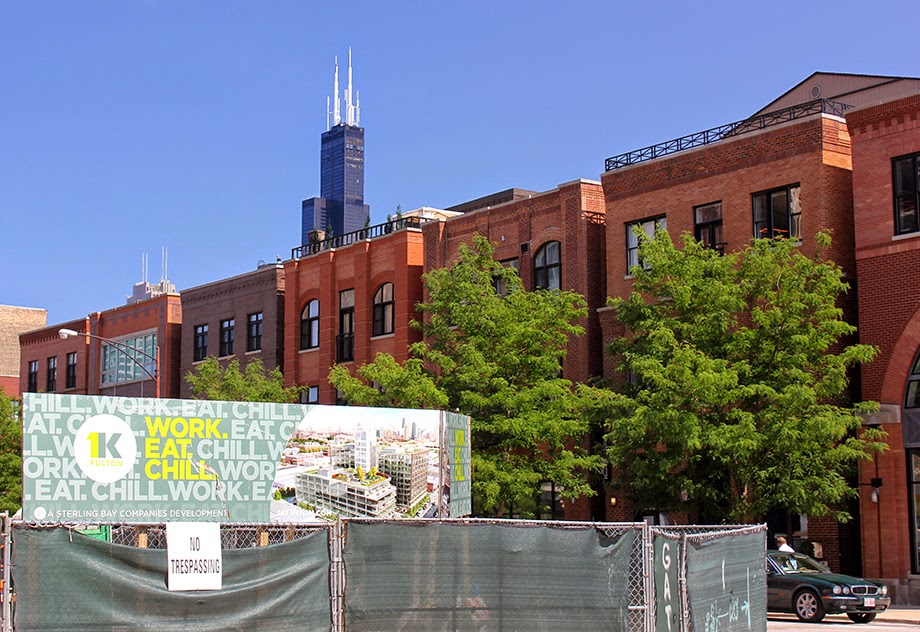 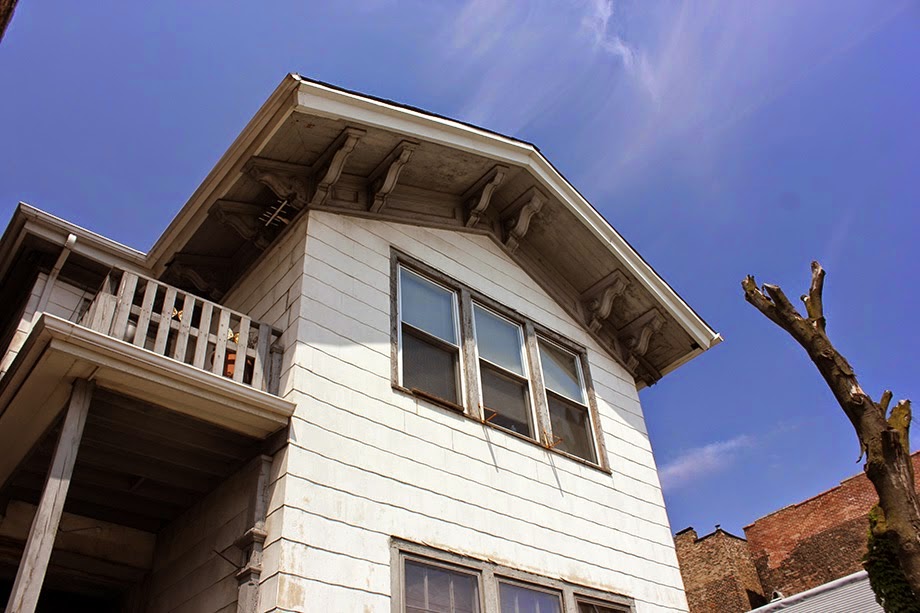 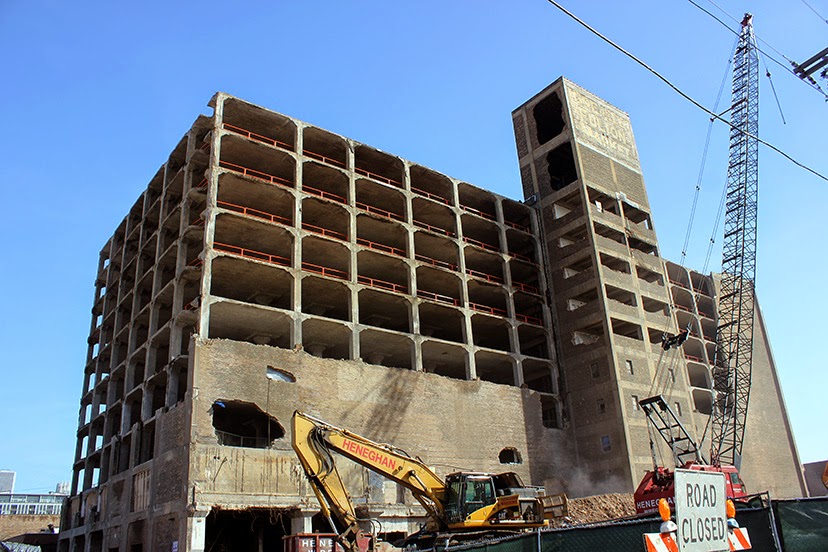 Your blog is so good i really inspire to see your blog thanks for share. Chicago food grade warehouse