The 1906 San Francisco Earthquake - the Burnham and Root connection 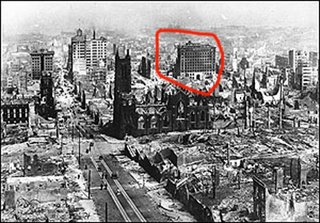 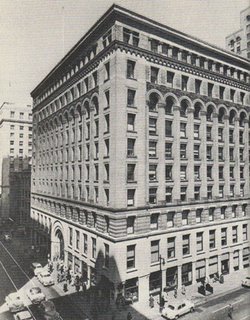 Tuesday was the 100th anniversary of the Great San Francisco Earthquake of 1906. Circled in red in the photograph accompanying this post is Burnham & Roots 1892 Mills Building, which for several years was the tallest in the city. It was built for Bank of California founder Darius Ogden Mills who bypassed the opportunity to build a hotel in Chicago in favor of an office building in San Francisco. According to John Wellborn Root chronicler Donald Hoffman, Root designed a structural system of "a steel frame anchored to masonry piers," which proved a strong enough buttress to survive the earthquake, although the building, including a sinuously winding, richly ornamented cast iron stair, was largely gutted by the ensuing fire. In 1908, it was rebuilt and expanded under the guidance of the successor firm of D.H. Burnham & Co., and remains a San Francisco landmark to this day.