A Great Piece of Urban Theater Returns for the Season 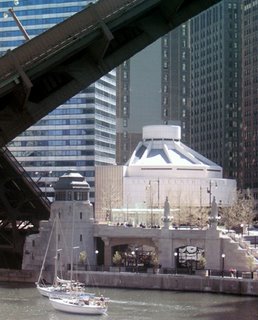 One of the great pieces of urban theater returned to Chicago this past Saturday with the first of this year's boatlifts, opening up the Chicago river's sequence of bascule bridges to allow tall-masted sailboats to travel to and from Lake Michigan. Chicago has more of these moveable bridges than any other city in the world. Until not that long ago, maritime rules required the bridges to be opened for any boat, at any time, but in our more efficiency-driven age a deal was struck with the feds to limit the lifts to one a day on Saturdays, Sundays and Wednesdays. spring to fall.

The efficiency has minimized traffic jams but 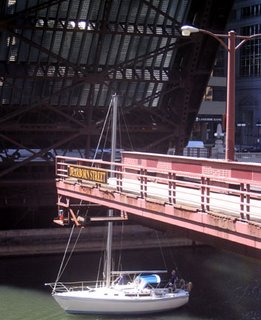 stolen away still another bit of the romance of the city. You used to be able to look down the river and see the upended, split roadboads of several bridges soaring up in salute to the riverfront skyline. If this Saturday was any indication, the Chicago Department of Transportation now allows only one bridge to be opened at a time. For boaters, the experience must be something between a leisurely sail down the Chicago River's rich waterfront to an stop and start ordeal that begins at 8:00 A.M. but doesn't hit the Loop until 11:00.

On Saturday, the wait at Dearborn was even longer, as the tender strained to get the bridge to move, ultimately only getting only the south span to rise. The small 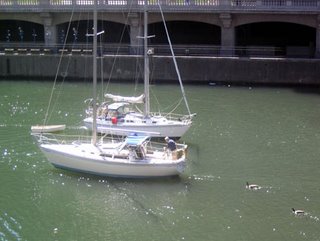 parade of boats included a pair of Canadian geese, swimming along, bringing up the end.

If you're want to learn more, as part of its Live & Learn program, the Latin School is sponsoring a course beginning at 10:00 A.M., Saturday, May 13th called Chicago's Moveable Bridges: An Inside Look. Tom Powers, chief bridge engineer and deputy commissioner, Chicago Department of Transportation will take participants inside the Lake Street Bascule Bridge during an actual bridge lift. Check out their website for details and for a pdf registration form, or call 312/582.6035 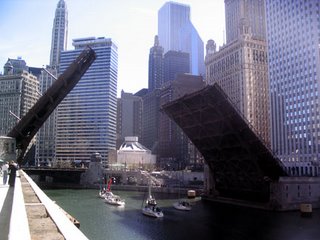