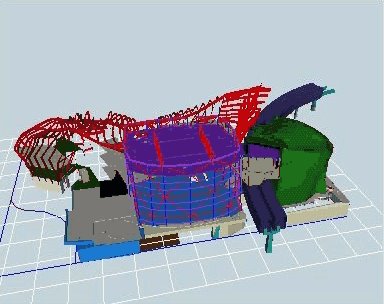 Joseph Burns of engineering firm Thorton-Tomasetti has called Martin Fischer the "rock star of the 4th Dimension." The Swiss-born Stanford University Professor was at UIC Monday night to talk about the effects and potential of 4D modeling in the field of construction. 3D modeling has been around for a long time. The swirling forms of Frank Gehry buildings like the Walt Disney Concert Hall in Los Angeles and the Pritzker Pavilion in Millenium Park would be impossible without the CATIA software, originally developed from CAD programs for aerospace, that insure that the wide range of irregular parts, each with its own discrete shape, don't offer up any nasty surprises by not fitting together when assembly takes place on-site

The 4th dimension is, of course, time, and in Fischer's world, this means modeling that not only provides visual simulations to aid in evaluating and marketing specific designs and the 3D construction models that bring all the elements - structural and mechanical - of a building together to insure, to cite one example, that a large pipe and an impenetrable beam are not inadvertantly sharing the exact same location, but that also plots out those modelings over the full construction cycle. To illustrate, Fischer played a 4D simulation that revealed that a huge cooling unit was planned to be added to a building after the construction of the structure left no opening wide enough to actually bring it in. The 4D simulation prevented this rude surprise from actually happening by prompting the structure to be modified to allow an ingress large enough for the cooling unit to be slid in at the appropriate point in the schedule.

Fisher heads up the Center for Integrated Facility Engineering, which defines its mission as being " the world's premier academic research center for Virtual Design and Construction of Architecture - Engineering - Construction (AEC) industry projects." The website is enlivened by streaming video of actress Cameron Diaz's participation in a class of sustainability this past October. Stanford also hosts a 4D CAD Research website with a host of project simulations posted, although they seemed to have stopped after 2002.