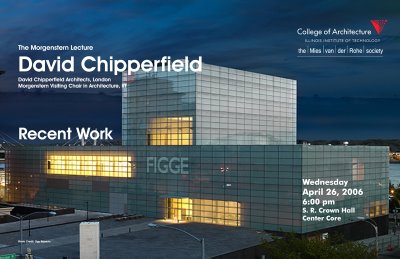 An April 26th panel on Careers Paths in Planning and Architecture, co-sponsored by Women in Planning and Development, and Chicago Women in Architecture, is among the late additions to the April calendar of architectural events. The same night, IIT has added a lecture at Crown Hall by British architect David Chipperfield, whose new Des Moines Public Library opens tomorrow. (Chipperfield's website is one of those with the annoying presumption of expanding your browser window to fill ever square inch of your screen, no matter how big your monitor is, despite the fact that the actual image area never expands beyond a small set square in the middle.) It's also the same night that Archeworks will hold its Spring Final Critique.

Also at IIT, a scheduled April 11th lecture by S. Faisal Hassan on John Cage has been replaced by one by architectural and art photographer Todd Eberle.

Finally, on Friday, April 21st, Civic Blueprint will introduce itself to Chicago with ReFab, a benefit for Architecture for Humanity at remnant reseller Salvage One.