And Now for Something Completely Different - Architecture via Beuys and Klein

Via Archinect, we came across this link to a 1982 music video of artist Joseph Beuys as 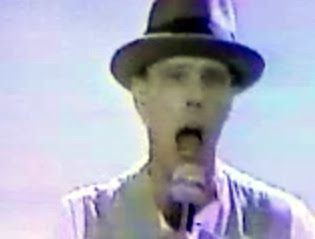 vocalist for a band, complete with a trio of backup singers, singing a protest song against Ronald Reagan's arms policies. The sound is more soft California rock than angry protest, but it's still fun seeing the sixty-year-old Beuys singing and swinging the mic above his head near the song's end. Because of Beuys, Frank Lloyd Wright's Guggenheim will always be associated in my mind with the smell of lard, since the first time I visited the museum it was exhibiting a major retrospective of Beuys' work that included two massive chunks of lard in the central atrium that were impressions of an abandoned spur of an unfinished highway tunnel.

And speaking of true originals, the Beuys video is posted on the extraordinary UbuWeb site, an overstuffed attic of a museum of videos, interviews and information on avant-garde artists. Currently featured is Jonas Mekas' video on the last three days of poet Allen Ginsburg. Also new is a video of two of Yves Klein's most extraordinary performance pieces, Anthropométries de l’Epoque bleue, in which three nude models 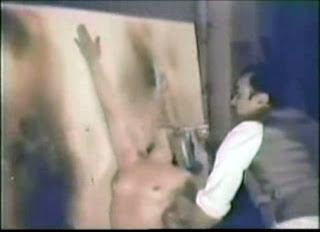 smear themselves with blue paint and make prints of their bodies against white paper, and a sequence on the making of his Fire Paintings, in which another pair of nude models are doused with water and pressed against white paper, which Klein then attacks with a flamethrower. The areas left damp by the models resists the effect of the flames, leaving silhouettes of the women's forms. 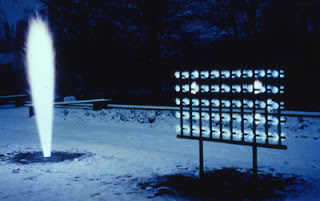 and Fire Column (Sculpture de feu), a ten foot high plume of flame. Klein had a concept of architectural space that put a radical spin on Mies' classic less is more. "Space is what is immaterial," he remarked, "and especially unlimited and this is precisely what fully and unfailingly explains and justifies the development of architecture towards the immaterial for the past fifty years!" In Klein's architectural projects, air and fire demarcate roofs and walls, imparting a mystic sense of the infinite.

If you haven't checked out UbuWeb, do it now, but be warned, you may not come out again. There's everything from Apollinaire reading his poem Le Pont Mirabeau, to interviews with Marcel Duchamp, John Cage's Norton lectures, music by Mauricio Kagel, John Lennon's diary, John Ashberry reading his A Blessing in Disguise, Gertrude Stein and Ogden Nash, together again . . I must stop now, I must stop. I must stop.

glad you liked that one. UBU might just be the best site on the web.

lard and the guggenheim is there anything better?