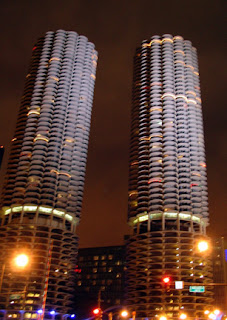 architect Bertrand Goldberg has now been completed. The archive, acquired through a 2002 gift from the Goldberg family, includes over 30,000 documents - over 270 linear feet of photos, drawings, sketches and the like from across the fifty-five year career of the architect of Marina City, which alone accounts for 279 entries in the catalogue. You can view information about the collection here. There's a bibliography of the speeches given by Goldberg from 1958 on, concluding with a series of four talks, including a lecture titled "Modernism: The Ghost Walks" given at IIT just months before his death in 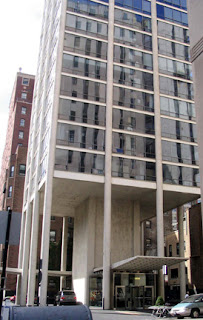 October of 1997 at the age of 84. There's also eight pages of listings of articles on his work.

Perhaps most importantly, for all those who are unlikely to be treking down to the Ryerson Library to ask for the boxes to brought down from the shelf for a quick peek, there's a link to an impressive, still-in-progress website by designer Justin Braem devoted to Goldberg's life and work. Its introduction page includes this quote:

“My message, I think, is much more important either than myself personally, or than the quick identification as the round-building architect. I am talking about the performance of people in a social system, about the performance of people in the city. I have spent a great deal of time not only studying what I have been able to discover, but to demonstrate it. I only wish there were more people who shared with me this interest in the role of architecture in society.”

The website includes a detailed description and copious photographs and illustrations on each of 42 major projects.

The Art Institute is planning a major retrospective of Goldberg's work for 2010. Ironically, by that time, one of his important buildings, Prentice Hospital in 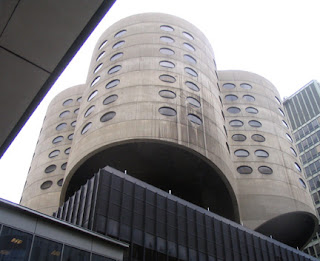 Chicago, may well no longer exist. This fall, the hospital, itself, moves to a much larger facility. Northwestern University, which controls the Goldberg property, has yet to announce plans for the stunning building, but if history is any indication, the clout-heavy institution will not be shy about using its muscle to shunt aside any obstacles to a decision to demolish, including a move for landmark designation, which Prentice does not currently have. Neither, astonishingly enough, does Marina City, which continues to undergo a series of mutilations at the hands of a new owner who is converting the House of Blues Hotel, carved out of what was originally the complex's office building - long-time home to Goldberg's practice - into a Hotel Sax.