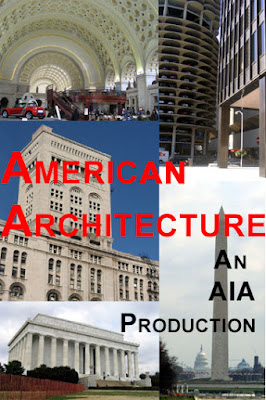 subsidiary of the American Institute of Architects?

It's another cog in the AIA's PR juggernaut marking its 150th anniversary that includes the specious and inane America's Favorite Architecture survey, which has been converted into a barnstorming exhibition that opens at its first location, the AIA's Washington headquarters, on April 11th. On April 13th, there will a rededication ceremony at 111 Broadway in New York, site of the first AIA meeting. The AIA and its PR firm, Imre Communications, also wangled a congratulatory epistle out of the White House. ""Laura and I send our best wishes," its bland four paragraphs concludes.

As a Si monumentum requiris circumspice kind of guy, I'm still pondering whether a National Architecture Week is really a good idea, but I'm pretty sure AIA's proprietary appropriation of the concept, reeking of self-serving press releases and misguided focus groups, isn't. (If you want to see how a local effort can transcend the ham-fisted efforts of the parent, check out 150 Great Places in Illinois.)