The Psychological Acoustics of Space - Walter Murch on BLDGBLOG

The MoPo of MoPo's is BLDGBLOG. U of C graduate Geoff Manaugh's superdense (in the best sense of the word) blog on "Architectural Conjecture :: Urban Speculation :: Landscape Futures". The blog, which has also just been named to Time Magazine's 2007 Style and Design 100, is a compendium of Manaugh's obsessions, and it's not surprising that he found a kindred spirit in legendary film and sound editor Walter Murch, with whom he's recently posted an extensive interview.

The bulk of the interview is devoted to Murch's speculation on a connection between the Pantheon in Rome and the theories of Copernicus. Murch quotes 7th century 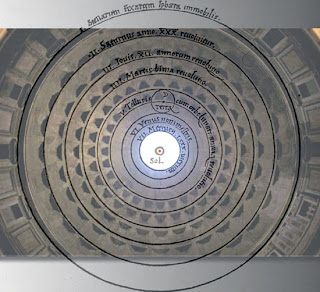 historian Dio Cassus that the very name Pantheon comes not from a reference to the wide array of Gods originally worshipped there, but “because of its vaulted roof, it resembles the heavens.”

Murch goes on, "That powerful image of the central source of sunlight surrounded by a series of concentric circles must have been an overwhelming experience for Copernicus . . . " He cites a drawing by Copernicus, who having lived in Rome was undoubtedly familiar with one of its most famous buildings, of a system with the sun in the center, surrounded by concentric rings of the orbits of the planets. closer together towards the center, wider apart at the fringes. When Murch superimposes the drawing over an image of the interior of the Pantheon's dome by Wolfgang Wackernagel, the rings of the orbits match up to the rings of the dome almost perfectly. There's much more to Murch's arguments - from a sun-worshiping emperor Hadrian to Bode's Law - and it's worth checking out the entire interview.

Just as Murch finds mathematical ratios that are common to both building and the orbits of the planets, he has also deployed mathematics to the art of film editing - at least 14 points of view a minute for a successful action sequence, four for a dialogue sequence, but what struck me most in the entire interview is in his interest in, in his words, "how a place sounds". He talks of watching John Frankenheimer's 1966 film, Seconds, a creepy tale about getting a second chance at life in someone else's much younger body. While most of us remember that film, if at all, for the way cinematographer James Wong Howe's use of a fisheye lense gave the story a closed-in, unsettling feeling, what riveted Murch's attention was how well the film rendered the very individual acoustic of a highly unique space, Grand Central Station.

"There was just a single hand-held shot gliding down the main staircase," recalls Murch, "but accompanied by this…. bwoooaaahmmmm… the sound of that great room in all its wonderful complexity. It hit me very hard, emotionally, even though in retrospect it was quite obvious: the realization that you could join a certain tonality with a certain architectural space to create an emotion in the audience. And, if you wanted to, that you could then manipulate or distort that tonality to create a different sense of the visual space and a different emotion."

Murch relates a story about director Michelangelo Antonioni. "To familiarize himself with the acoustic space of Manhattan (where he had never made a film) he sat in a room 34 stories up in a hotel somewhere on Fifth Avenue, writing down exactly what he heard over a period of three hours from dawn through rush hour. He came up with the most wonderful metaphors for sounds that were mysterious and unfamiliar to him, but which would be run-of-the-mill to a New Yorker."

Unless they happen to be designing an auditorium, the acoustics of architecture is something that few architects seem to cultivate a knowledge of or even have an 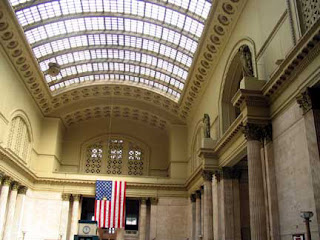 interest in. The psychology of space is something all but ignored, yet it is often decisive in how people experience a given space. There is a unique sound to the waiting room of Chicago's Union Station that, as much as the monumental scale and sunlight pouring in from skylights, defines what it feels like to be in that space. The concourses of Illinois Center are uncomfortable not only because of the physical aspects of the bad architecture, but because there is an unpleasant deadness is how sound cramps in the low-ceilinged space.

Today's emphasis on green design is now taking architecture beyond traditional modern concepts of building comfort - all cubic feet, all 72 degrees, all the time - and replacing it with a focus on the study of personal comfort. The study of the psychological effects of the acoustics of space, however, remains stuck in a pre-Copernican mode.