To the Chicago Plan Commission, it may be "Residential-Business Planned Development No.368", but to the rest of us, it's Santiago Calatrava's Chicago Spire. It comes before the commission for 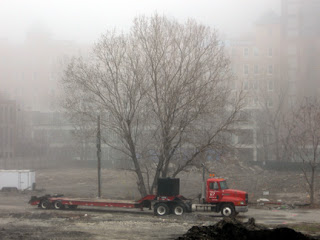 The smart money has the proposal, which has the blessing of Chicago Mayor Richard M. Daley, easily winning the Plan Commission's approval. Still in question is whether or not Kelleher actually has the resources to bring the project to reality.

As part of the marketing push for the Spire, last January Santiago Calatrava also came up with a new design for the proposed DuSable Park, which is on the other side 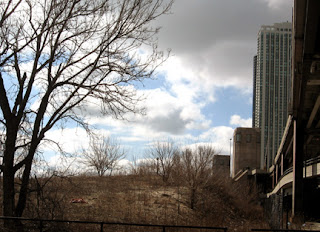 of Lake Shore Drive just east of the Spire site. No funding mechanisms were offered for the proposal, however, although Kelleher appeared to have pledged $500,000 towards an estimated final cost of $12,000,000.

In March, Kelleher and Calatrava made another pitch for the project before a special meeting sponsored by the Grant Park Advisory Council, at which Kelleher's contribution was announced as rising to $6,000,000, although the ever-evasive developer has managed not to be pinned down on a final commitment.

The city's inability to bring DuSable Park into being has been an enduring civic disgrace, exposing the lethargic underbelly of the City That Works - Sometimes, and 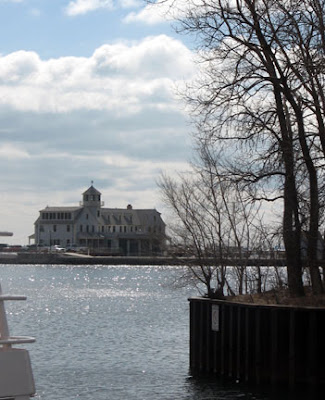 for the Right People. The DuSable park proposal, for a three acre patch of land just south of the Ogden Slip, goes all the way back to 1987, when then-mayor Harold Washington, announced it as a way to honor Jean-Baptiste DuSable, a native of Haiti who built Chicago's first permanent settlement at what was then the mouth of the Chicago river just east of present-day Michigan Avenue.

Even as the city was spending over $200,000,000 on Millennium Park, matched by an even larger amount of corporate support, DuSable Park, despite its prime location just west of Navy Pier and relatively meager $12,000,000 budget, has been left to 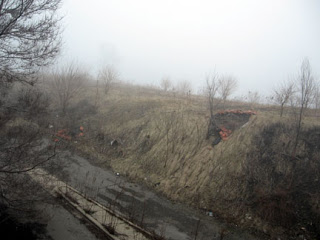 twist slowly in the wind, used for as a dumping ground for soil excavated for nearby high-rise projects.

For two decades, the city and the Park District have left the site, adjacent to Chicago's most popular tourist attraction and adjoining a new prime upscale neighborhood, a forlorn dump, with earth piled high into picturesque, but garbage strewn moors contaminated by radioactive Thorium, a remnant of the lakefront's former industrial history when the Lindsey Light Company used it in its gaslights to impregnate the filament-like mantles that burned to provide the light.

Everyone and his brother is weighing in on the Spire, and I'll be joining them shortly. For now, I have just one piece of advice to the city:

If Kelleher can come up with a billion or more to finance the Spire, he should have no trouble sorting through his pocket change to come up with a $6,000,000 good-faith commitment to fund DuSable. The city should put the screws to Kelleher to get this money, now, before they allow him to turn a single spade of soil for his gargantuan project. That way, even in the worst case scenario - Kelleher goes bust and the Spire goes unfinished - we at least get the park and DuSable finally gets his fitting memorial. 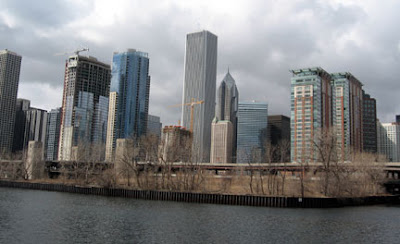 Who in their right mind would agree to something like that? Good faith - does that exist, or do we only expect the rich to act that way? Do they give you the free TV or check before listening to their sales pitch?

Now we want the TV.

Fine. Then the toaster if you set up a new bank account.

Our good friend Garrett has given the impression he's giving $6,000,000 for the park. One, because he's a nice guy, two, because it'll be easier to sell multi-million dollar units when they're not looking down on a waste dump of toxic soil. Surely, it's only good manners to take him up on his offer and start giving his prospective tenants something better to look at now.

Wow, a 320% increase in FAR, a 350% increase in density, and all We The Public get is an IOU? Why do we even bother with zoning in the first place?

I'm glad to hear that the Daley administration is all for this project (The Spire) and is trying to push it forward. It will be a nice trophy for Chicagoans to admire and remember for years to come from Daley, Jr.'s days in office much like the Sears Tower is from his poppa's days in office.

I'm all for building up Chicago as much as possible and say hats off to Daley!!! Let's develop another Manhattan, NY for the US!