Doctor Atomic to debut at Lyric - will Robert Spano keep his shoes on?

While Chicago media has been filled with reports on the upcoming premiere this Friday of John Adams' latest opera, Doctor Atomic, in a Peter Sellars production at Lyric Opera, you still have to 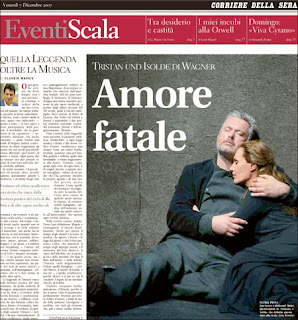 hand it Old Europe for its deep engagement with the art form. As reported by the irreverent and indispensable Opera Chic, for "the opening of La Scala's new season, Milan reacts kinda like the USA does for the Superbowl," including Tristan und Isolde inspired confections in bakery windows, and a 23-page supplement in Milan's Corriere Della Sera, Italy's largest daily, with a full calendar for La Scala's season, and the complete(!) libretto for Tristan. You can download the section here. (Beware, its over 30MB).

Opera Chic's offers up her own blow-by-blow account of the six-and-a-half hour premiere. The images here are OC's screen grabs from a complete video rebroadcast of the performance the following evening, to which I must add her obligatory legal disclaimer: "The following shots are pictures taken from a television broadcast, and 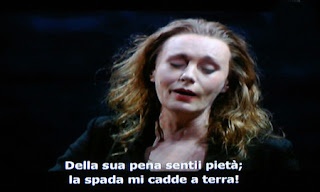 are not promotional materials of Teatro alla Scala."

OC's report includes everything from the show outside, to teh performance, itself, its intermissions, an ongoing, slightly obsessed speculation over the relentlessly unfurrowed brow of the evening's Isolde, soprano Waltraud Meier, and a soxian (or is it Sachsian?) coverage of the footwear transformations of the evening's conductor, the increasingly cherubic former music director of the CSO, Daniel Barenboim, whom OC praises for his "thorough understanding and embrace of Wagner, washing the audience in the most gorgeous strains of orchestral brilliance." (Act I: shoes discovered to be badly worn. Act II, Scene 1: replacement with borrowed shoes. Act

II, Scene 2 shoes too tight, conductor leads Wagner's lovers to their doom in his stocking feet. As with life, itself, apparently the first rule of conducting Wagner is wear comfortable shoes.)

Such pragmatism would no doubt find a warm reception here, the town of Shoeless Joe Jackson, but I'm still betting Doctor Atomic's conductor, Robert Spano, will most likely remain shod throughout the evening. The opera, first produced in San Francisco, "takes place in New Mexico’s desolate mesas in the hours before the test detonation of the world’s first 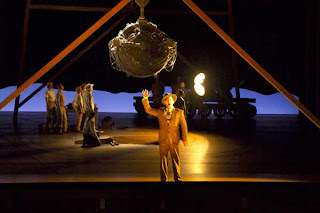 atomic bomb near Alamogordo at 5:29 a.m., July 16, 1945", and centers on the brilliant, troubled head of the project, legendary scientist J. Robert Oppenheimer.

“Doctor Atomic," says composer John Adams, "has at its core the hottest of all mythic images that Americans have – the atomic bomb. The bomb contains a host of signals: scientific understanding and achievement, political and military power, global responsibility, and the potential to forever destroy the planet." 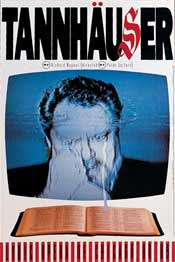 1988 Lyric Opera production of Wagner's Tannhauser, which placed the action within the recent fall of televangelist Jimmy Swaggert. The omnipotently wise New York Times decreed it a production that "quickly palls." Not for me. While I may have gone to the opera (don't we all?) for the nude dancers, in the Venusburg scene, I found Sellar's conception, despite it's often jokey flipness, increasingly powerful, and his setting of the final scene of Tannhauser's redemption in an airport waiting lounge, those hermetic contemporary spaces mingling alienation, rootlessness and hope, not only brilliantly apt, but profoundly moving.

Doctor Atomic's local tie-in is that while the first bomb was tested in New Mexico, 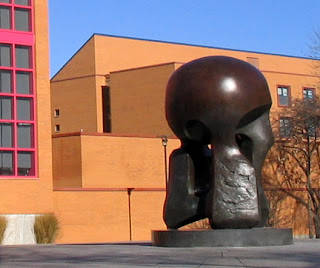 it was at the University of Chicago, three years earlier, under the stands of abandoned Stagg Field, that a team led by the great physicist Enrico Fermi created the first controlled nuclear reaction, on December 2nd, 1942. Today, the site, behind the new Riccardo Legoretta dorms, is marked by Nuclear Energy, a sculpture by Henry Moore.

I saw Spano conduct Kaija Saariaho's L'Amour de Loin in Santa Fe four years ago, another Peter Sellars production, and the stage was submerged in six or so inches of water. When Spano went out to take his bow, he kept his shoes on and waded right out into it. I'm pretty sure he kept them on at opening night last week!