Daniel J. Wakin reports in Tuesday's New York Times that the San Francisco Opera is planning to join the Met in transmitting six operas from its current 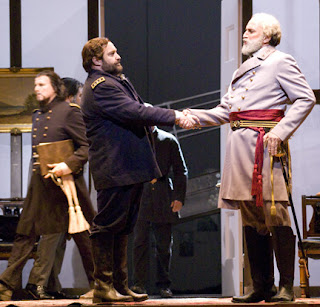 season including La Rondine, Don Giovanni (which I just heard this past week, audio-only, on Vox), Samson and Delilah, The Magic Flute, Madama Butterfly, and Phillip Glass's new opera Appomattox, with a book by Christopher Hampton, which had its world premiere at the SFO in October.

Unlike the Met broadcasts, which are live, the SFO's will be recorded, in 2K digital projection with 5.1 surround sound. The SFO's press release disses the Met for using projectors designed for those annoying ads that run before the movie, versus it's own high-def DLP projectors from Texas Instruments. To get the series going, SFO negotiated a deal wherein net income after expenses and a 20% distribution fee cut to SFO is to split 50/50 between the company and organized musicians and stagehands, scenic designers, and the conductor. The SFO is partnering with The Bigger Picture, Inc., a digital distributor of content to theaters, whose link to the opera series on its website falls into a "Directory Listing Denied" error page. The Times reports that the series will show on 200 screens, versus 600 now showing the Met broadcasts. The SFO will be repeating each opera four times, however.

On still another front, La Scala Milan is working through Emerging Pictures to present a number of its recent productions in American Theaters. It began in December with the Zeffirelli Aida, conducted by Riccardo Chailly, followed by the Barenboim Tristan und Isolde in January, an Angela Gheorghiu/Ramón Vargas Traviata conducted by Lorin Maazel In February, with Maria Stuarda, Forza, and Il Trittico to follow in subsequent months. You can find a description of the broadcasts here, and a list of participating theaters here. Pickings in the Chicago area are sparse, with no announced venues in the city proper. Crystal Lake's Raue Center was the only one listed for the December 8th Aida showing. The other outlets, the Lake Theater in Oak Park, Rosemont 18 in, you know, Rosemont, and Classic Cinemas Charleston 18 in St. Charles still, strangely enough, list the Aida as TBA and offer no further information on future productions. (You can, however, purchase advance tickets for Hannah Montana in 3D.)