On a site once dominated by the massive, Central Cold Storage warehouse, now long forgotten, 353 North Clark, a 600+foot-high, 46-story skyscraper, rises between Marina City and the terra cotta Thompson Building. Lohan Anderson are the architects, and the building will be the new headquarters both for Mesirow Financial, moving from the Thompson, and the powerhouse law firm of Jenner and Block, abandoning an IBM building falling under Trump's shadow.

Not long ago, the project's crane sections were corralled like pieces from an erector set. 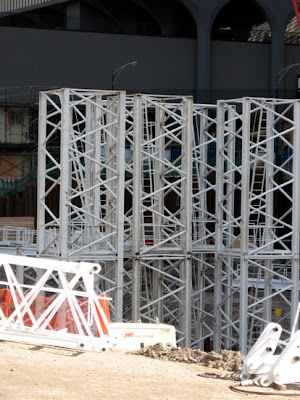 Now they've been stacked and assembled into what itself is a tower, looking deceptively fragile as it rises high into the sky, an ephemeral backbone destined to be demolished and removed once the tower it supports reaches completion in 2009. 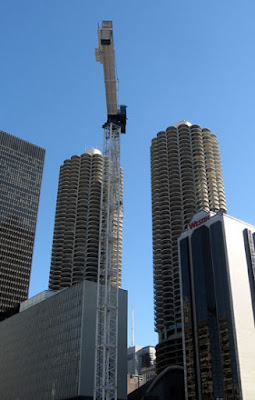 At a million.2 square feet, the project is so big that even the construction trailers are double-stacked. 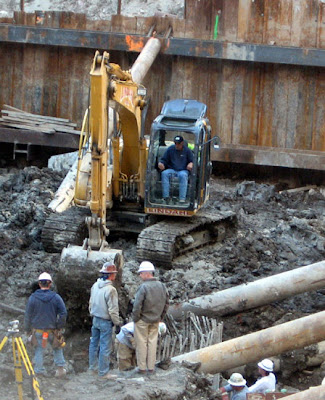 At night, with its earthen ramp, the site looks like a stage set from an Indiana Jones movie. 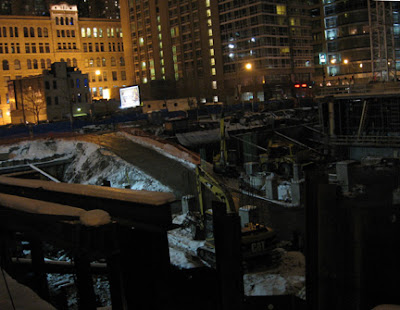 What a collage of ungainly equipment, raw steel, dense mud, makeshift barriers. weirdly angled supports, tortured rebar - a riot of mismatched, rough pieces - which will all somehow metamorphose into the final slick engine of perfection rendered below. 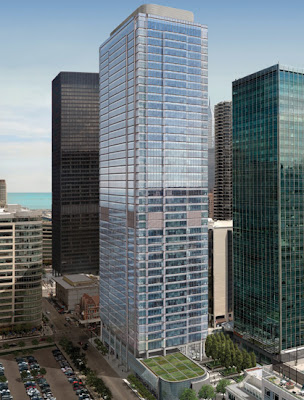 It was my understanding that this was planned with the buildings to the north on the other side of Kinzie. It will be nice to fill in the gaps in that area.

There you go with the picture of Marina Towers again!

Helmut has an interesting building a few blocks away. This one by Lohan is undistinguished.