Via Slashdot comes this story from the BBC on how Egypt will now claim copyright over the Pyramids and Great Sphinx. 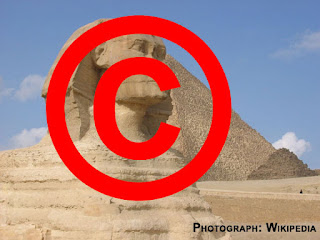 Zahi Hawass, the Jack Valenti of Egypt's Supreme Council of Antiquities, who last year strong-armed Exelon Corporation CEO John Rowe to fork over a 2,600 year old sarcophagus he had purchased legimately eight years before, now plans to shake down anyone making copies of museum pieces or "ancient monuments such as the pyramids."

While the cause is a good one - raising funds to preserve Egypt's ancient historical treasures - the effort can only backfire. Hawass, who has been presented as dedicated scholar, is increasingly taking on the appearance of a bureaucratic buffon. The fact that, according to the report, he blithely told the BBC that the law, expected to be passed by the Egyptian parliament, "would apply in all countries," indicates that he's become delusional, as if legislation passed in a foreign country would somehow be binding on citizens residing in another sovereign nation. Tell that to the likes of Tom Tancredo and see how far you get.

Copyright, designed to make sure authors get paid for their creative works, is now being subverted not just to provide giant corporations an in perpetua cash flow, but as a juice racket scamming off the works of artists five millennia dead.

Just another step in debasing the once sound principle of intellectual property into a lawyers' strategem for boundless greed. For laws to be obeyed, they require some small semblance of the reasonable. Once they descend into pure farce - think Prohibition - they sink into impotence, engendering only evasion and defiance.

Is Ellis Levin his lawyer?