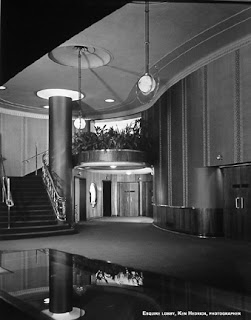 photographed by Ken Hedrich at the ArchiTech gallery.

According to the announcement:

Hedrich Blessing was the the choice of the best architects and designers to document their creations. And like their famously cinematic exterior shots of the modern buildings that made them known the world over, HB's interior views often resembled movie sets.

The 1930s was the first full decade of business of the greatest architectural photography firm in America. Chicago's Hedrich Blessing was the firm chosen by the best architects and designers to document their creations. And like their famously cinematic exterior shots of the modern buildings that made them known the world over, HBs interior views often resembled movie sets.

Hollywood not only influenced the high design of the best decorators and interior architects, its lighting and staging were mimicked by the architectural photographers who were instrumental in communicating the look of "Art Deco" to the rest of the world.

Included above is Hedrich's 1930's photo of the ocean liner stage set of a lobby of architect William L. Pereira's Esquire on Oak Street, one of the most elegant movie palaces in Chicago. Usually booked with art 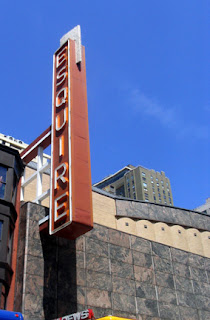 films, it probably hosted the biggest crowds in its history when it was single exclusive venue for the first run of the surprise blockbuster Star Wars in 1977. It was still largely intact a decade later when its 1300 seat auditorium was carved up into a shoebox multiplex that was obsolete almost from the moment it opened. Closed since 2006, the Esquire today sits forlornly awaiting its impending demolition, the middle letters of its iconic vertical sign still glowing weakly, like a ghost fading into oblivion.