According to a report in Crain's Chicago Business, the Postal Service, in the 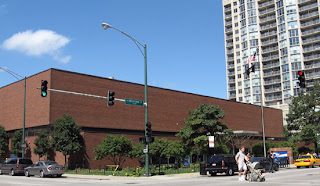 words of a quoted spokesman, is "beginning the process of exploring the options for leveraging the value of that property", that property being the Fort Dearborn Station post office facility, which takes up a full city block at Dearborn and Grand (and Clark and Ohio).

One of the features of the Chicago Central Area Plan issued in 2002 was to turn that block into a public park. That was before the heavy densification of River North had reached full flower, and last year's destruction of the areas only park space, the private park south of the AMA Building. Never has the need for open space and a central identifying park for River North more critical, but "leveraging the value" raises the spector of still another mega-project in the already overbuilt district. Crain's also quotes, however, 42nd ward Alderman Brendan Reilly as having encouraging discussions with the Postal Service about the park option. The key question: will the city step up to the bat on this, or as has become the depressing norm, will the Department of Planning and Development again forget about the Planning part of their name?

We'll have a lot more about this later.

For now, via BVictor1 at the skyscraperpage forum, here's the info: public hearing to be held tonight, January 30th, at 6:00 P.M. at the Post Office at 540 North Dearborn, 2nd floor. (I don't know how to get to the 2nd floor, either - hopefully there'll be signs.)

Wasn't this a Myron Goldsmith

^Yes, and and a very nice modern building in an area full of crap architecture.